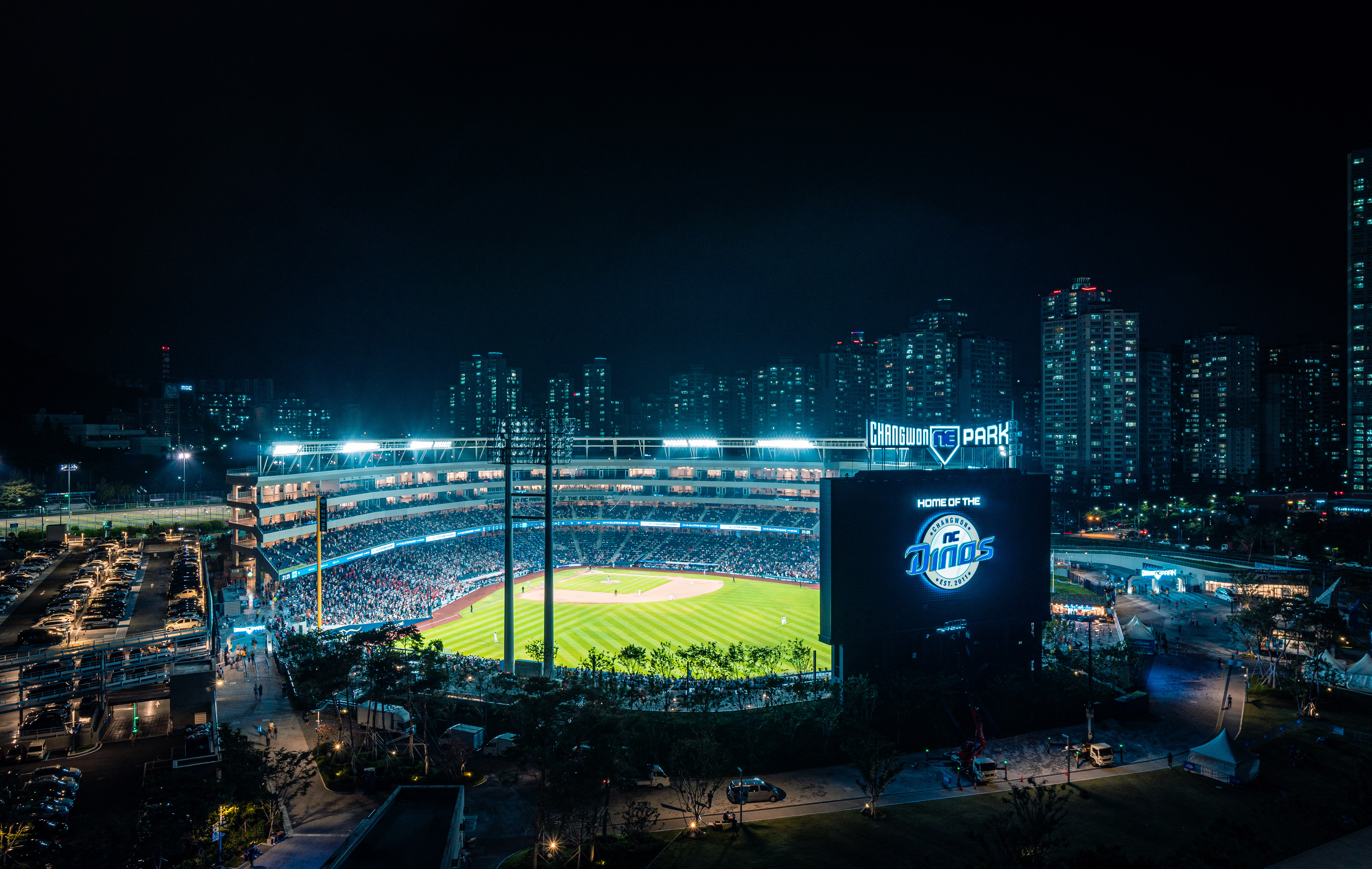 Last spring, Changwon NC Park unveiled its new baseball stadium to the public with the high hopes of becoming an urban baseball park where entertainment and relaxation could coexist. Since then, it has grown into a cultural park for the local community by offering a variety of entertainment events.

Today, we would like to talk about the process that lead to the concept of the Changwon NC Park when we re-designed it. We especially strove to offer a unique experience for all visitors through a visitor-friendly design and various entertainment features. Furthermore, we wanted to provide a recreation and culture platform where people could comfortably visit and enjoy the park even there are no games. The following article will explore the specific elements that differentiate Changwon NC Park from other ballparks.

The Joy of Being Together

In March of 2019, NC Dinos introduced its new stadium, Changwon NC Park, replacing Masan Stadium. Yes, Changwon NC Park is where NC’s new CI was applied for the first time and from its new name to its new facilities, it shows visitors surprisingly sophisticated changes.

The biggest change is the name of the baseball stadium. For Changwon NC Park, we chose ‘PARK’, instead of ‘STADIUM’ or ‘FIELD’, because it encompasses the desires and dreams to provide visitors a place not only to watch baseball, but also to gather, play, relax, and most importantly enjoy.

It is clear that Changwon NC Park is not just about baseball. “When we started working on Changwon NC Park, we spent a lot of time talking to Dr. Yoon,”  said Emily Oberman, a partner at Pentagram, a design consultancy that designed the logo and signage for Changwon NC Park. “Dr. Yoon really felt like there should be an energy and engagement for all the people that come to the park, that it wasn’t just about baseball. That it was about being together,” Oberman said. “That inspiration was really important to us… [so] the key concept of Changwon NC Park is the idea of bringing people together for a wonderful night or afternoon of entertainment. It’s about families, and the city, getting outside, and being together,” she added.

Throughout Changwon NC Park, the concept of joy and togetherness is expressed in ways that reflect NCSOFT. Specifically, a variety of features at the park represents the entertaining characteristics of game and offers a special experience for visitors. We wanted to make sure that the entertainment isn’t only what visitors are looking at on the field, but the entertainment is also in the way that they get to their seats and the way that they stare at the scoreboard; every single moment was designed to be remembered as a wonderful one for the fans.

The key concept of Changwon NC Park, according to Emily Oberman, a partner at Pentagram.

Each and every design feature of Changwon NC Park is visitor-centered. The Changwon NC Park experience begins at the main entrance. The welcoming entrance with the dimensional NC Dinos emblem makes visitors feel like they are entering another world as soon as they walk in. Designed with curved text that moves outwards in an uplifting way from the home plate engraved with NC CI, ‘CHANGWON NC PARK’ emblem symbolizes the lively energy of the NC Dinos fans. 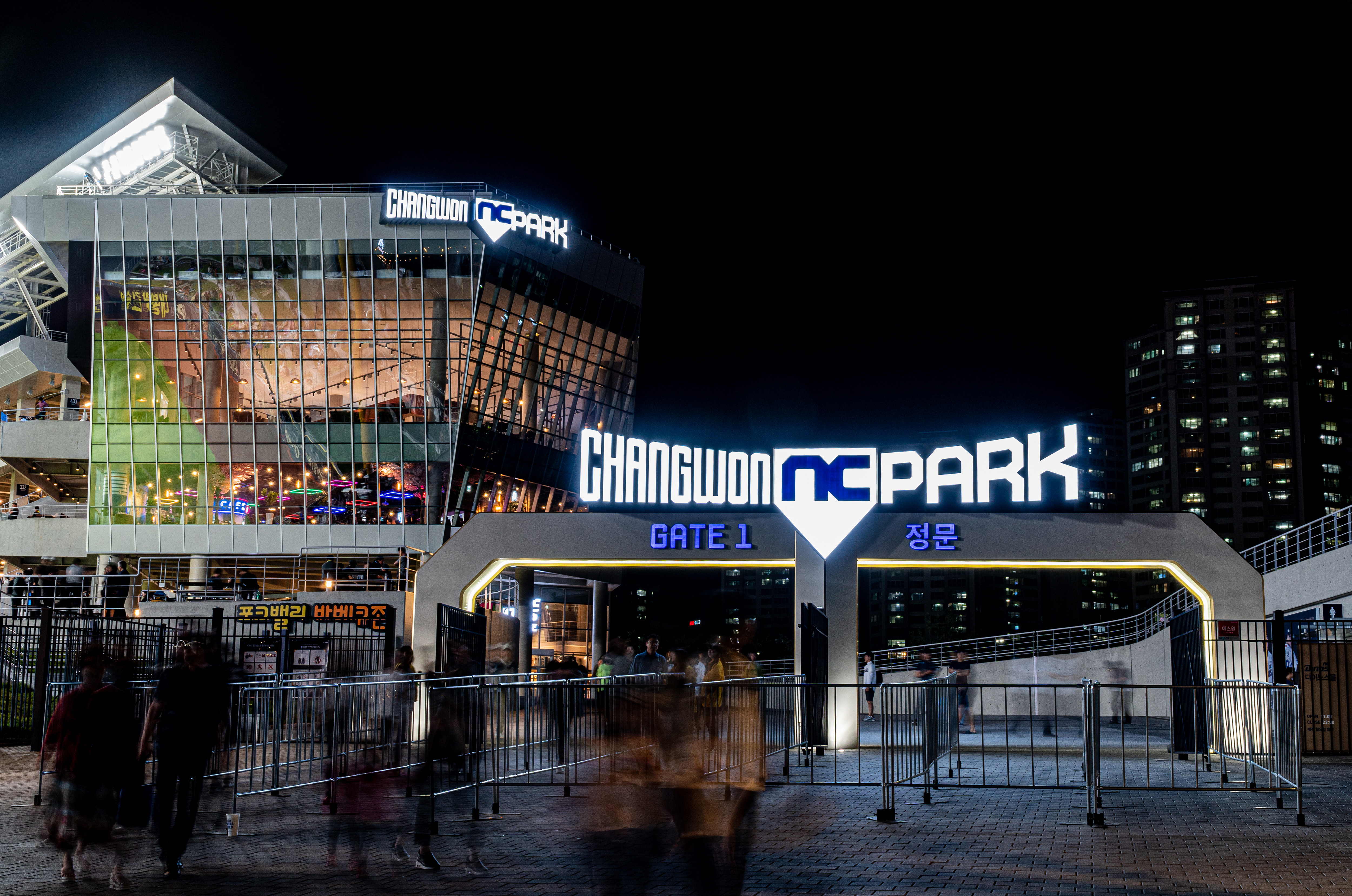 The main entrance is designed with a dimensional emblem.

Special care was taken to even on the way to the seat for everyone. Unlike the traditional baseball stadium entrance where visitors have to walk up some stairs to their seats, Changwon NC Park is designed with two outfields where a slope leads up to the main concourse, allowing for direct wheelchair, pram, and children access. Such an open architecture is more accommodating for audience members with disabilities and families with young children. Furthermore, various seating options such as table seats, mini table seats, infield cheering designated seats, premium seats, terrace seats, and even picnic seats support a diverse community and give visitors a wide range of choices to choose from. 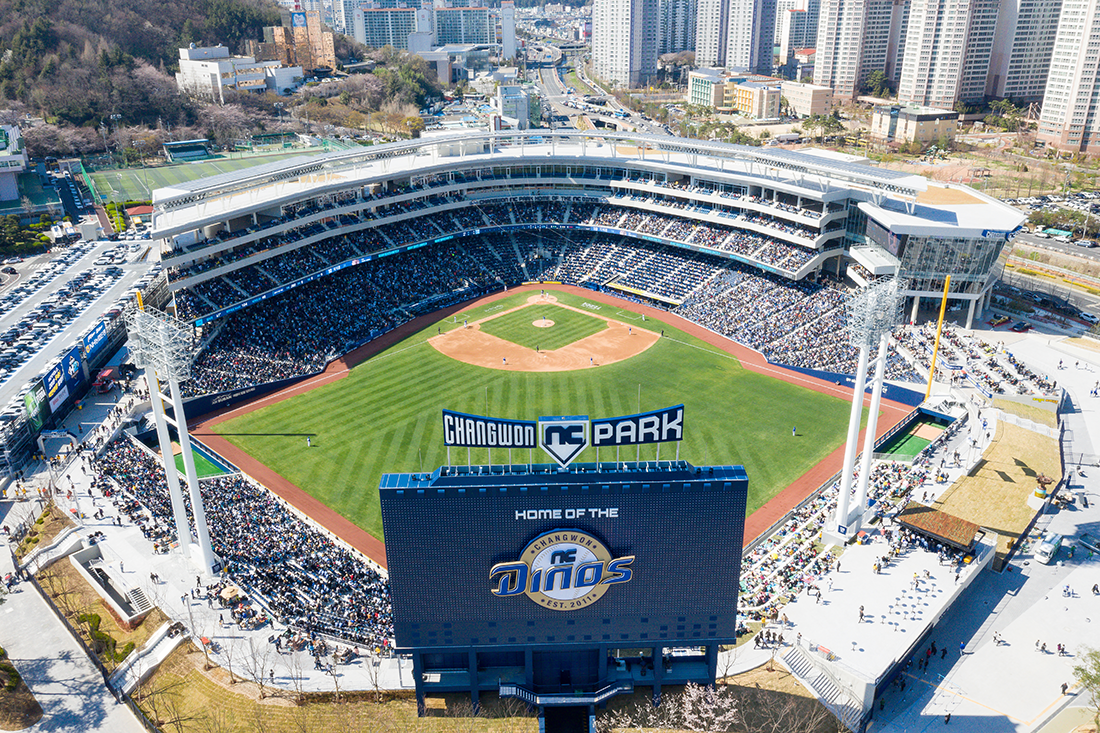 Populous, HAEAHN Architecture, and NOW Architects designed Changwon NC Park together. Populous is a global architectural design firm specializing in venues, and its experience working on nearly half of 30 Major League ballparks have been combined with the core values of NC Dinos to design the best stadium. As a result, Changwon NC Park is evaluated as the most MLB-like stadium in South Korea since it opened in March 2019.

Once in their seats, visitors are exposed to the new experience of watching the game with a completely unobstructed view. To ensure that visitors get the most spectacular view, Changwon NC Park increased the ratio of the first level seats among the total infield seats from 50% to 70% and minimized the number of pillars that secure the infield protective netting. As this infield seats on the first floor are located directly eye level with the field, visitors can clearly see the dynamic movements of the players and the flow of the ball. Moreover, the distance between the seats and the field is designed to be approximately 5 meters closer compared to that of other Korean baseball stadium; therefore, it brings the visitors close enough to see the infield action. This detailed user experience (UX) design brings players and visitors closer to each other to form a strong sense of togetherness and encourage them to share a sense of immersive joy.

When selecting a ‘best seat’ at Changwon NC Park, the question isn’t where one can get the best view of the game but rather how one wants to see it, since the game is equally easily visible from everywhere inside the park. 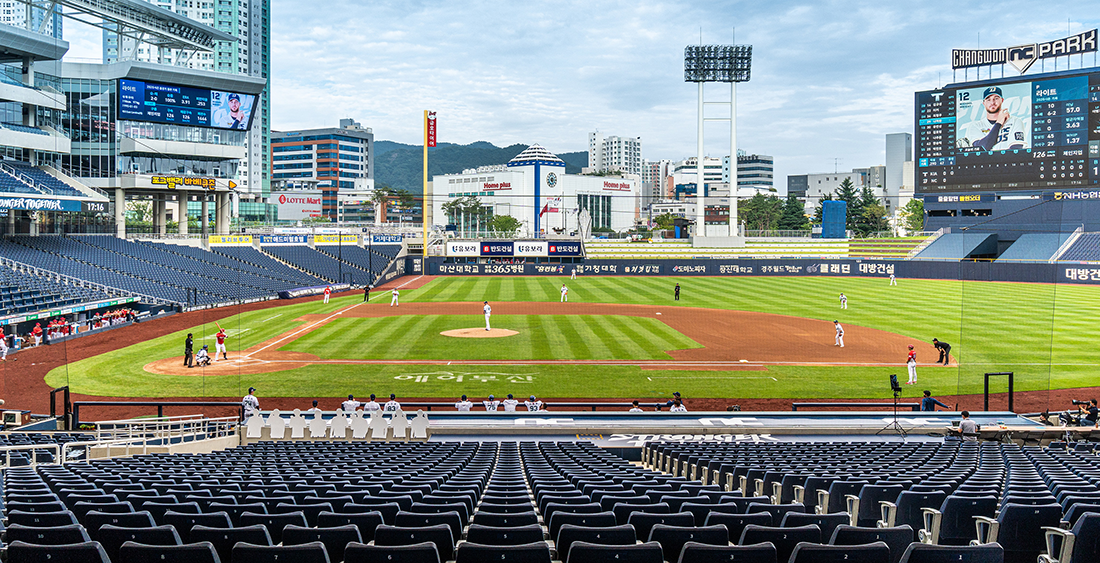 A view from the infield seats 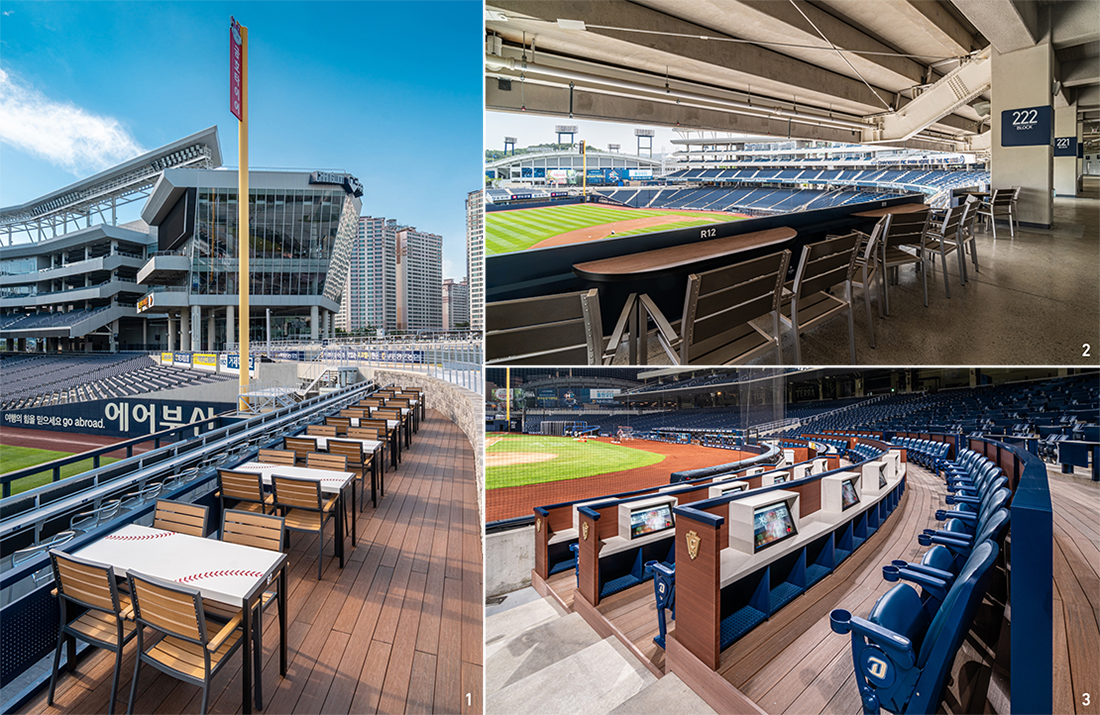 Of course, Changwon NC Park has various entertainment elements that provide remarkable fun for the visitors. These ideas allow the park to act not only simply as a place to watch games, but also as an entertainment venue where extraordinary experiences are made.

Along with many entertainment elements, the main signage is the signature installation that receives the most attentions and positive feedback. As the signage reacts differently to various situations, it makes important moments of the game even more special. Especially when the game atmosphere reaches its climax – such as when there is a homerun, a rally, or a break-time – the home plate at the center of the signage lights up and spins around, further escalating visitors’ excitement. Moreover, the large LED panel (33m X 18m) on the backside of the electronic scoreboard changes its animation depending on different situation and seasons, so the enthusiasm of the game can be shared even with people from outside the park.

The electronic signage after a win.

Of course, Changwon NC Park has various entertainment elements that provide remarkable fun for the visitors. These ideas allow the park to act not only simply as a place to watch games, but also as an entertainment venue where extraordinary experiences are made.

Along with many entertainment elements, the main signage is the signature installation that receives the most attentions and positive feedback. As the signage reacts differently to various situations, it makes important moments of the game even more special. Especially when the game atmosphere reaches its climax – such as when there is a homerun, a rally, or a break-time – the home plate at the center of the signage lights up and spins around, further escalating visitors’ excitement. Moreover, the large LED panel (33m X 18m) on the backside of the electronic scoreboard changes its animation depending on different situation and seasons, so the enthusiasm of the game can be shared even with people from outside the park.

The LED display on the backside of the electronic signage.

Near the main concourse, there is an Interaction Play Ball that is designed to provide a unique play experience for visitors. The wall is covered with special two-toned baseballs made of white and navy colors, creating a special message or image whenever the balls change direction. When there are no people, the wall displays the initial of the NC Dinos logo; however, when someone steps onto the signage that reads “PLAY BALL”, the balls rotate and flip to mimic their movements. This distinctive play spot truly presents the core values of NC Dinos – which values the joy of being together through interaction with visitors - through play experiences.

The Interaction Play Ball that reacts to mimic the movement 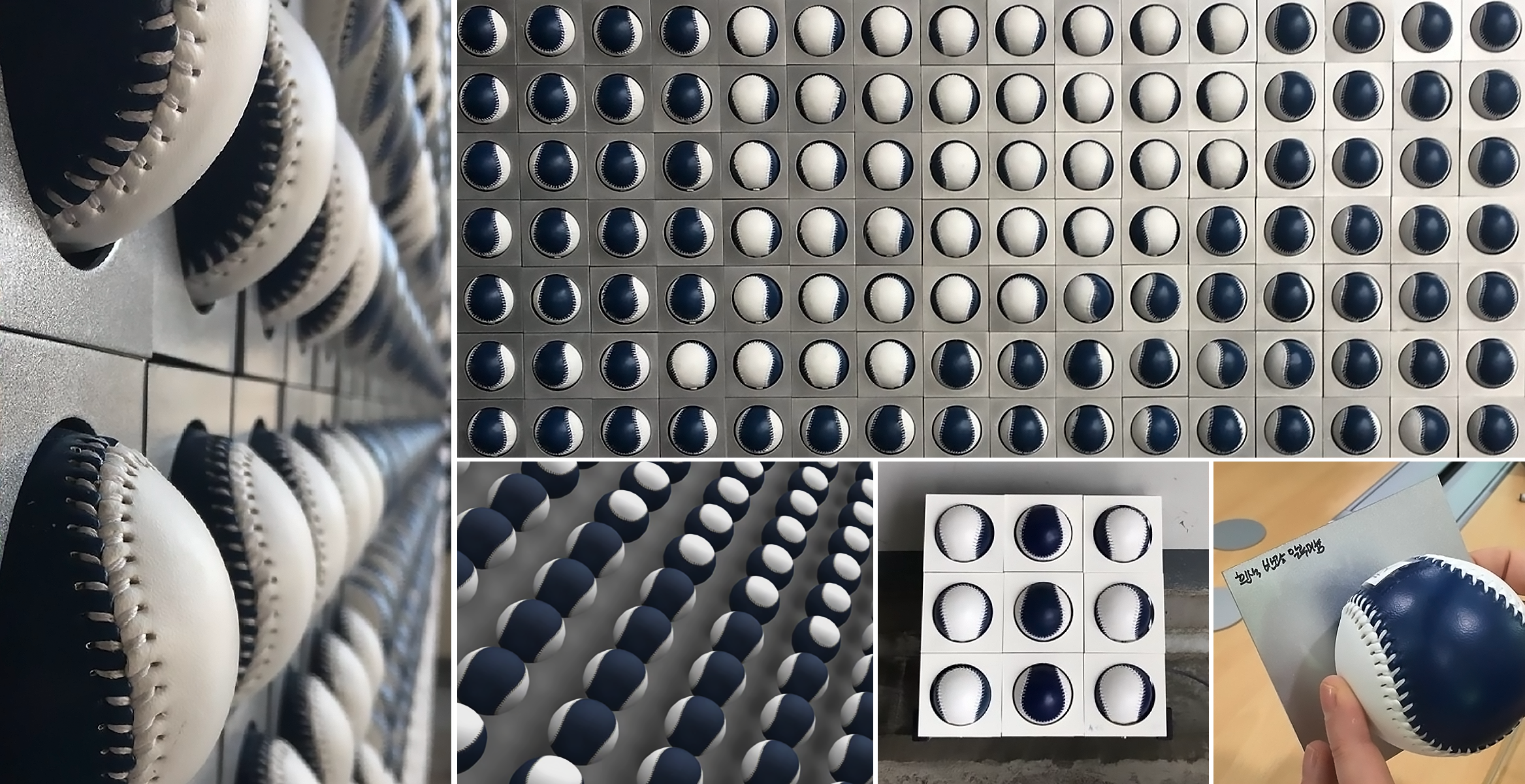 A close-up of the Interaction Play Ball. The wall consists of a connected set of silver plates that hold special balls made of white and navy color.

NC Dinos and Fans: Connecting the Community and Spreading Joy

Changwon NC Park continues to communicate with fans in various ways. South Korea’s professional baseball league, the Korea Baseball Organization (KBO) has opened the 2020 season without spectators due to the COVID-19 pandemic. Therefore, NC Dinos surprised the fans by filling the seats with the life-sized cardboard cut-outs of portraits sent in by the fans. Ever since KBO began being broadcasted on ESPN, such events, as well as Changwon NC Park has been gaining global attention. In this way, Changwon NC Park connects world-wide fans with a new kind of joy.

Changwon NC Park strives to do more than simply function as a stadium, instead, it attempts to be an open and accessible place like a park.

Changwon NC Park is a theme park where it has a baseball museum and family-friendly park, which is no surprise considering that Changwon has a 100-year-old baseball tradition. For the Dinos fans, Changwon NC Park is not only a place where they can enjoy a relaxing time with their families, but it is also an indispensable part of their lives.

At Changwon NC Park, visitors can enjoy a wide array of entertainment events even when there are no games. Most notably, there is “A Midsummer Night’s Dream” event, which is a summer overnight camp experience for making memories on the baseball field. Changwon NC Park isn’t just a stadium. It’s a destination for the local community where people can come together to engage and play through a ballpark tour, family experience program where families gather together, a barbeque party from the folk valley seat, spooky adventures, and many more.

In addition, Changwon NC Park presents a variety of events from holding ‘good gamer events’ where people can learn about healthy gaming habits, to collaborating with local organizations for culture festivals. For the future, Changwon NC Park is planning its extension beyond a baseball stadium into a multi-cultural platform by continuously offering a diverse range of entertainment events.

Changwon NC Park still has plenty of places to fill. We are planning to offer a variety of events that visitors can enjoy on non-game days. We hope that Changwon NC Park will become a place people can enjoy and make unforgettable memories on any day of the year, whether or not there’s an event going on.