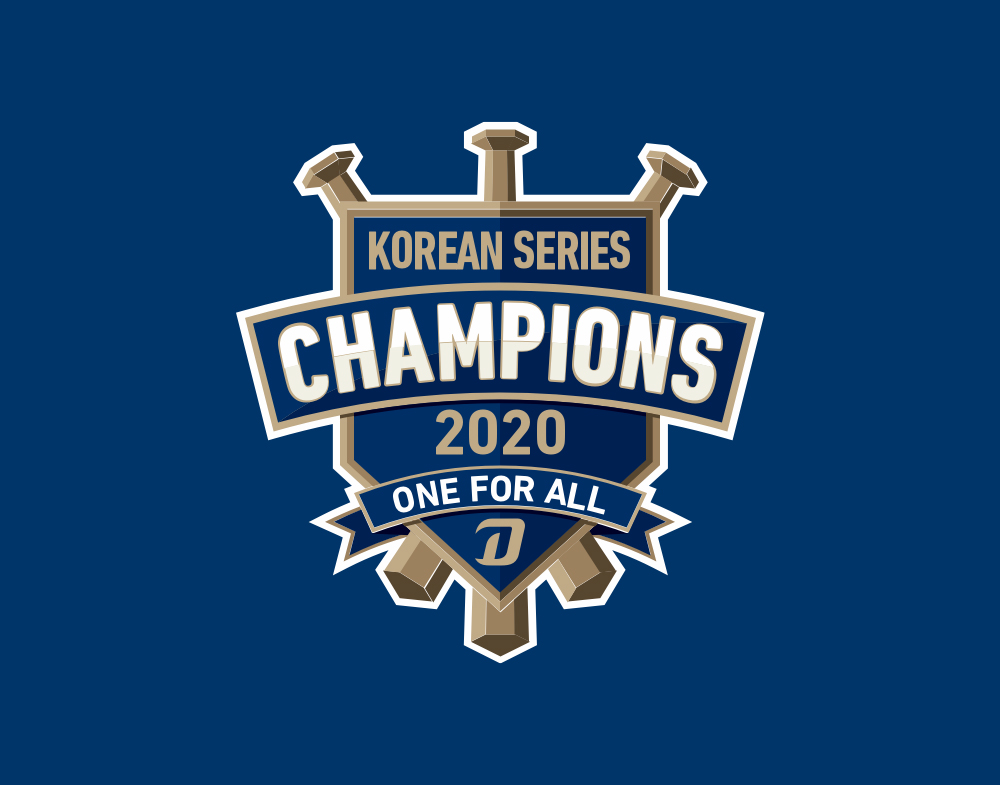 First-time dual championship in both the 2020 KBO Regular season and the Korean Series.

NC and NC Dinos have the strength and passion to challenge themselves and never give up.

We will not stop seeking new challenges in the future.

The 9th and 10th teams were needed to expand the size of Korea’s professional baseball industry, which had maintained the 8-team league for more than 20 years. Seizing this opportunity, NC submitted a letter of intent to establish the 9th team to the KBO. Nonetheless, there were a lot of criticisms regarding the foundation of NC’s baseball team: “A mid-sized company doesn’t have what it takes to enter professional baseball,” and “A baseball team founded by a game company will be amateurish.” NC was criticized for its uncertainties in the existing professional baseball league centered on large corporations. When Changwon, Gyeongsangnam-do was decided as the home of the team, baseball fans in other regions strongly protested. Kim Taek-jin, founder and owner of NC Dinos, overcame many obstacles one by one to found a new team that gives hope to the disadvantaged and creates new joy. Finally, on March 31, 2011, the era of the 9th baseball team began. 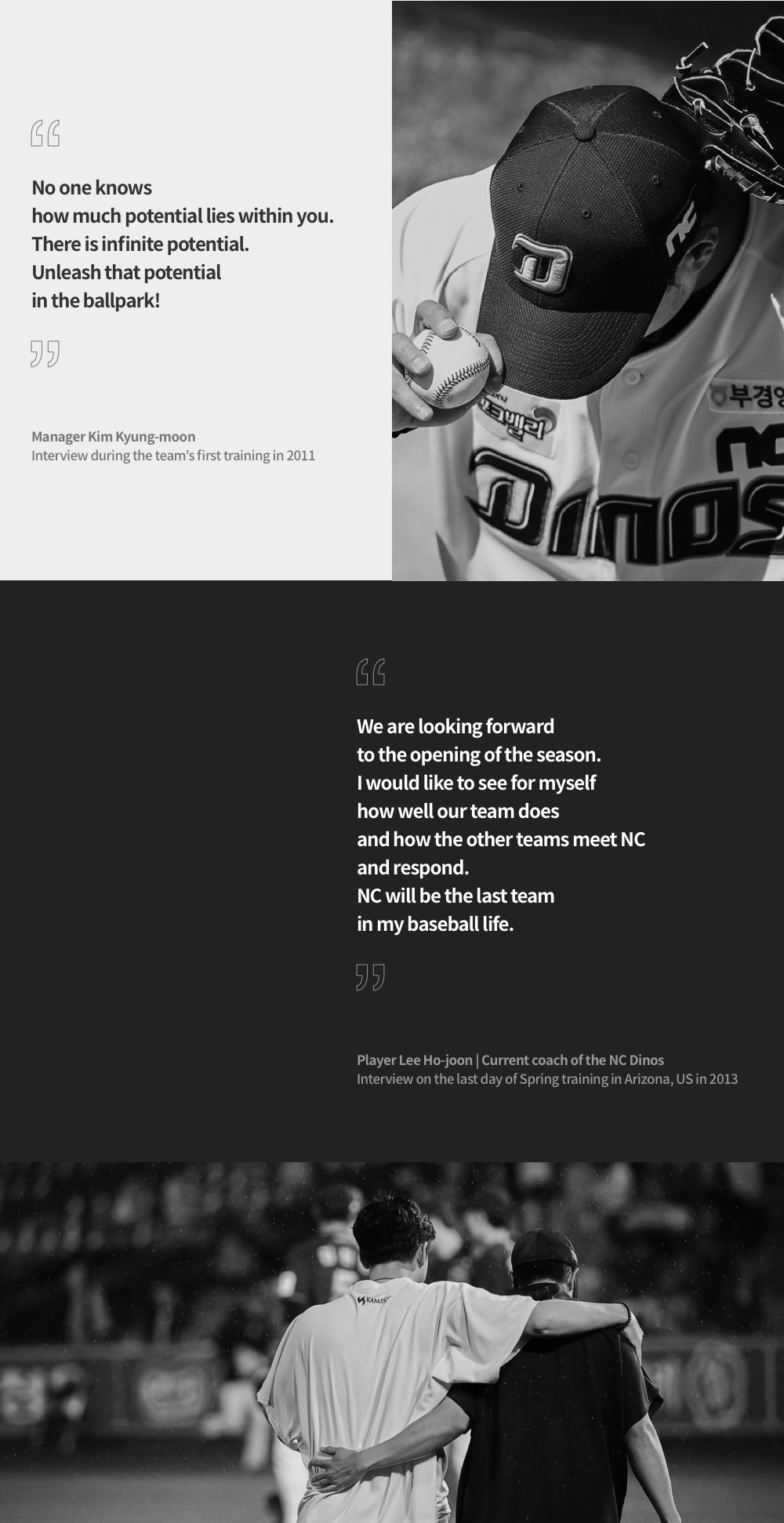 The future belongs to those who move and strive

The NC Dinos started to build its team. What the new team needed the most was ‘experience.’ To compensate for the lack of senior players who will be the center of the team, the NC Dinos implemented a ‘spirit coach’ system and veteran players were constantly recruited. The NC Dinos, which took their first step toward professional baseball’s Regular season, finished their historic first season in 2013, ranking seventh among nine teams. 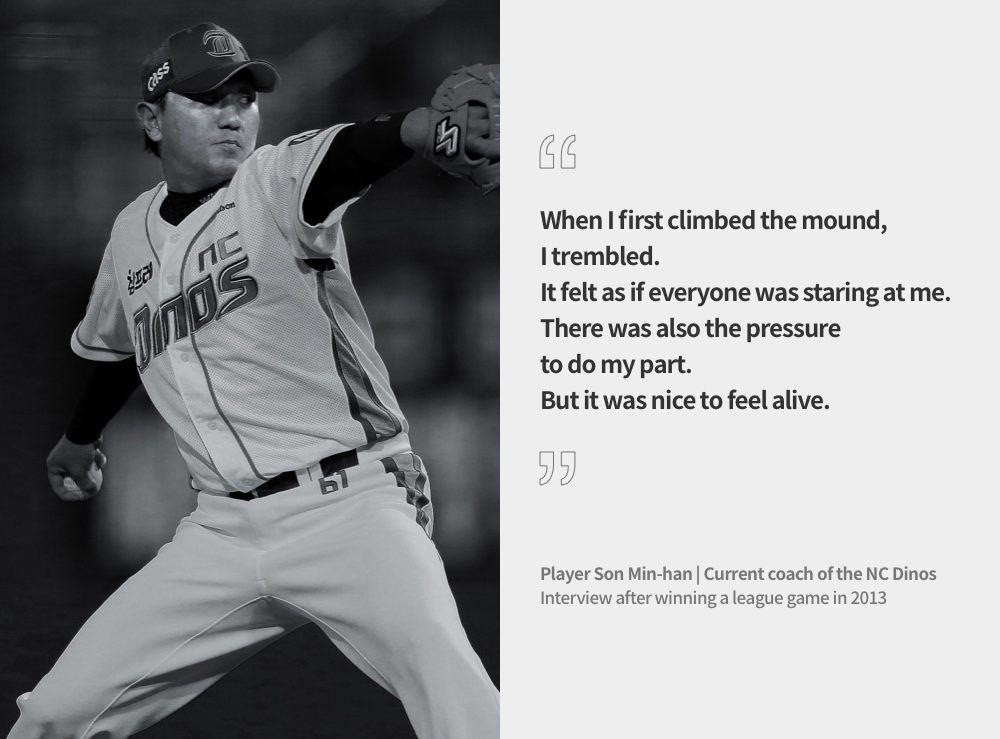 Putting everything on the line for baseball

Those who have played only baseball during their school days have no place to play. About 700 to 800 athletes apply as rookies, but the draft rate is only 10%. It is fortunate for them to start a professional life even as a reported player who does not receive down payment, but they will be released when they do not stand out. Thus, the 9th team and 10th team were needed. The NC Dinos provided opportunities for these players. Since the team cannot be formed by simply naming new players, they held two tryouts in June and September 2012. Players released from the professional stage, amateur players who failed to join the professional team, and even retired players. Kim Jin-sung, who was selected for the first tryout after two releases at that time, is now the core of the current bullpen. Won Jong-hyan also joined the team at a tryout, overcoming colon cancer and playing a finishing role. NC’s founding members, including Son Min-han and Lee Ho-joon who started their second baseball career at NC after taking off their professional uniforms, are now playing as key players of the team and working as coach of the team, creating the culture of the NC Dinos.

Things were not looking good for the NC Dinos in 2011. Most of the players, including Na Sung-bum and Park Min-woo, were rookies and released players. Most people expected the NC Dinos to deliver disastrous results. Nonetheless, the NC Dinos did not get swept away but managed the team in a way that was different from the existing teams from the beginning. Above all, it actively utilized data. The team established a new baseball data team in the company in 2011 and developed its own mobile power analysis system ‘D-Locker’ in 2013. Player Na Sung-bum, who joined the team as a pitcher and turned batter, leads the team’s core batting line under tight control; Park Min-woo, the team’s key second baseman, No Jin-hyuk, Kang Jin-sung, and Kim Seong-uk, the team’s main shortstops, have also grown rapidly. As such, the NC Dinos overcame the limitations of a new team that has shallow players and unfavorable conditions of their hometown with fewer promising players. In the end, all predictions that the NC Dinos will perform poorly were proven wrong. The team qualified for the Postseason in 2014, two years after entering the KBO League, NC Dinos finished second in the Korean Series in 2016, and advanced to Postseason for four consecutive years. 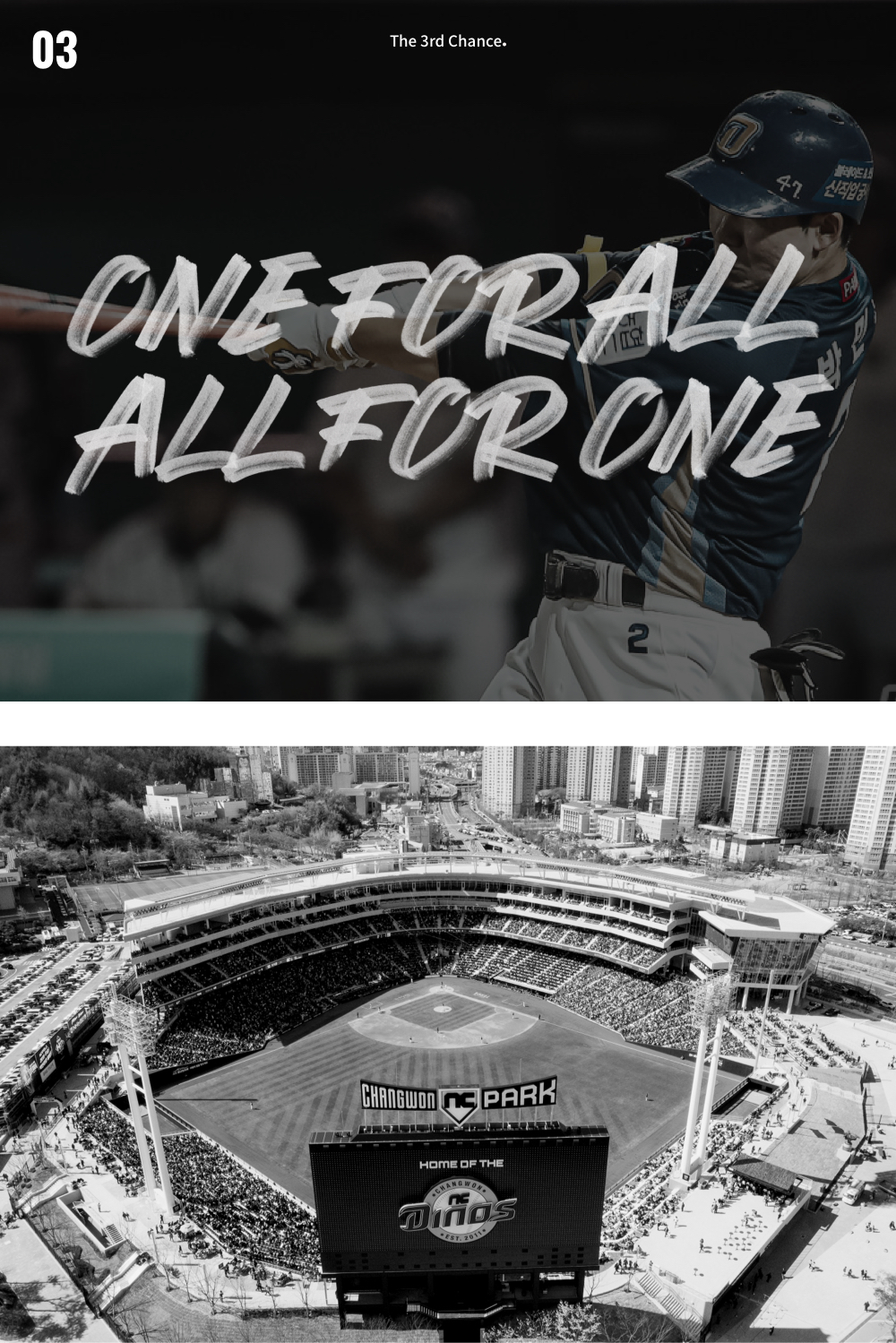 The NC Dinos invests heavily in the region to foster the baseball industry. The team spends about USD 280 thousand every year on youth baseball teams of elementary, middle, and high schools. In terms of local promotion, students in the Gyeongnam region or those who have contributed to the region are first invited, rather than celebrities or celebrity pitching. As there were many fans of other teams in the region, there were concerns such as “Can they be loved by locals?” But the NC Dinos dreamed of a drama wherein Changwon became one through sports. According to the data released by the Changwon Research Institute in 2019, the NC Dinos’ home games generate a ripple effect on production inducement of about USD 24 million and on employment inducement of about 440 people. 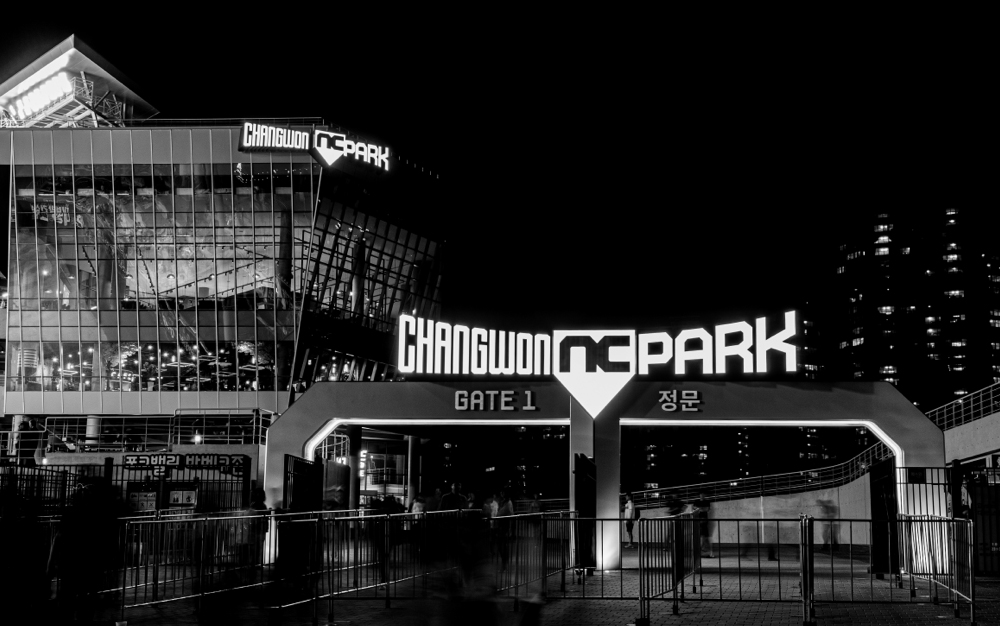 Changwon NC Park opened on the site of Masan Sports Complex. Since 2012, the Changwon-Masan Baseball Stadium has been renewed every year, but a new ballpark was needed. Shortly after the opening, fans cheered at facilities as good as those in the Major League Baseball. The NC Dinos did not limit Changwon NC Park to simply watching baseball. By providing various programs, they turned it into a park-like place where Changwon citizens can visit comfortably and enjoy leisure time. Changwon NC Park is planning to go beyond being a baseball stadium to a complex cultural platform. 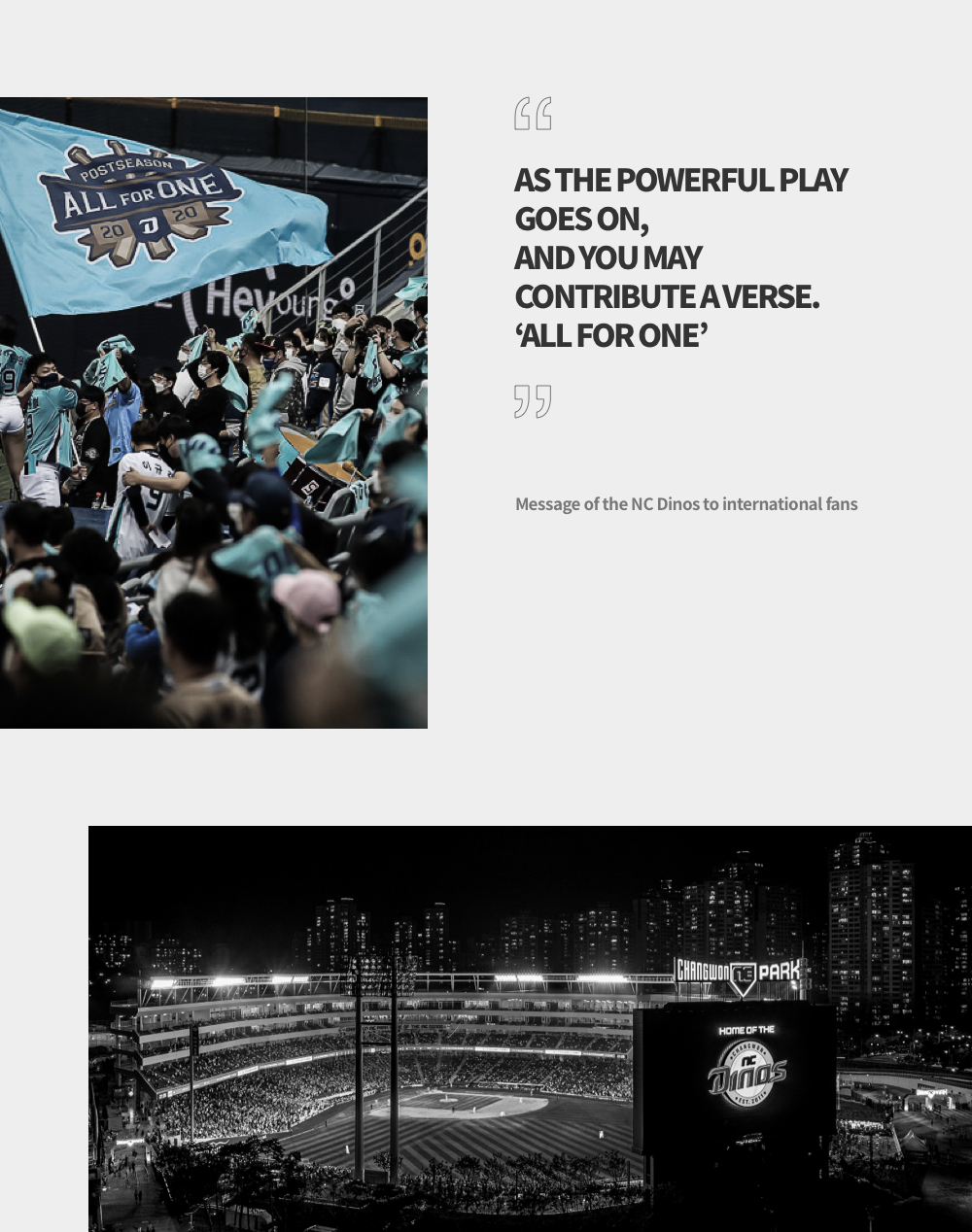 NC Dinos reaching out to the World

The NC Dinos launched a joint marketing campaign with Durham Bulls, a Triple-A team in North Carolina, US in June 2020. Although the whole world is in a difficult situation due to COVID-19, they agreed to share joy through baseball across the border and to gather positive energy. Durham Bulls, who first encountered the NC Dinos through the KBO League’s ESPN broadcast, said he naturally became interested in NC as it is located in North Carolina, US, which uses ‘NC’ as acronym. The passionate support delivered from across the sea heated up the spirit of victory even more. 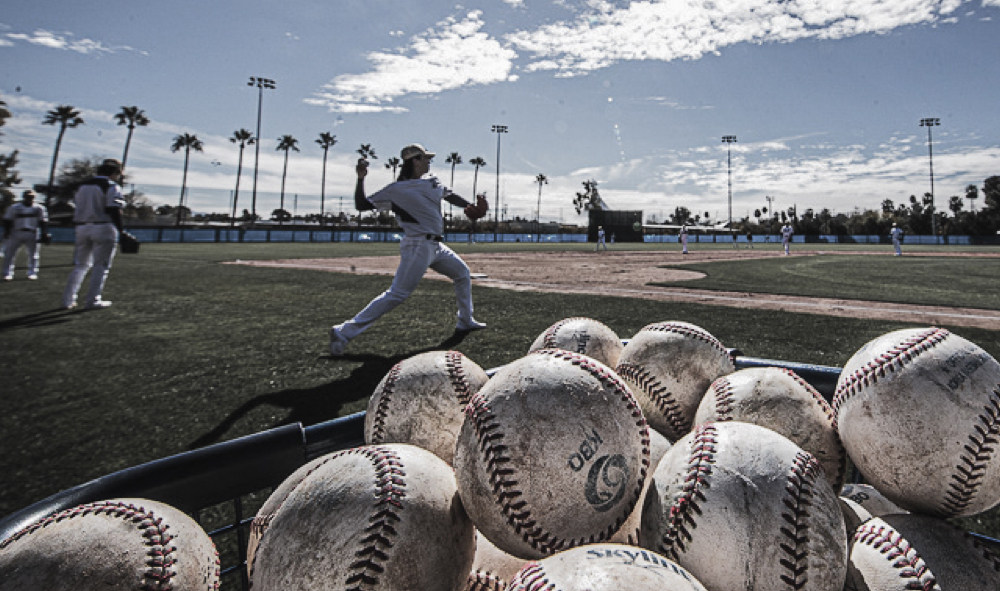 The NC Dinos, who became strong by being united as one and one to become strong. After 10 years of challenge, they bagged the integrated championship in the KBO Regular season and the Korean Series. 144 games: 83 wins, 6 ties, and 55 losses. We could move forward without hesitation because we had faith in each other. Just as Kim Taek-jin, founder and owner of NC Dinos, said, “Baseball is a drama”; we don’t think this moment is the end, but we will continue to write the scenario of winning.