PUSH, PLAY – Connecting our Past and Future

We are proud to announce our new mission statement, "PUSH, PLAY." After redesigning our CI in January 2020, we have been improving various brand experiences to represent the brand identity as well as innovative and future-oriented values.

Until now, we have shared the process of how brand interactions have changed over time on this blog so that readers can sympathize with the identity and goals that NC has. In this article, we will introduce our new brand mission and the achievements of rebranding as well as plan for the future. 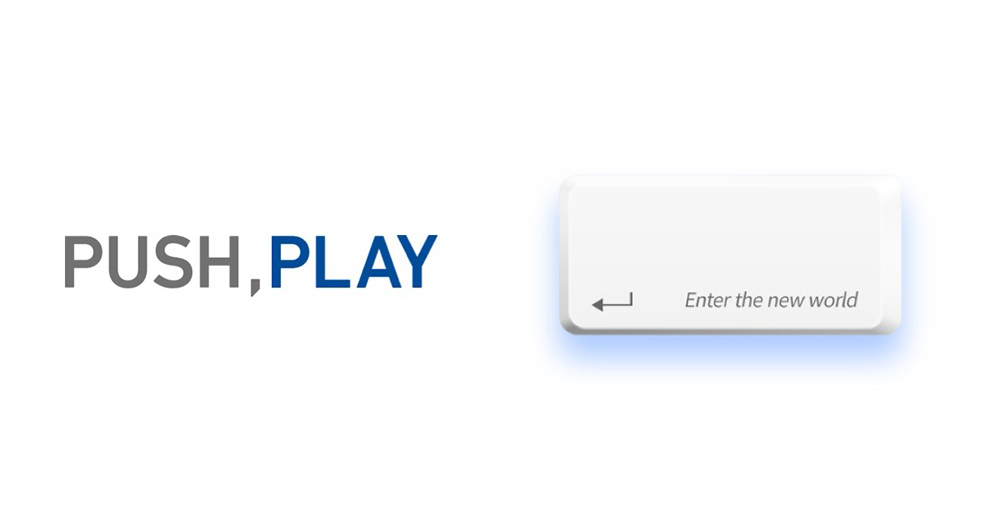 In 1997, when the Internet was just spreading to the public, NC created a virtual world where people can interact through the Internet. A new experience where people can play together without meeting each other in person presented the direction that NC needed to take, and it became the company’s mission - A New World Connected Through Joy. This mission has developed into NC’s core value and spirit, becoming the foundation for the current corporate culture of NC.

In January of this year, NC introduced its redesigned CI and announced several new changes. The new CI clearly and concisely represents the identity of NC and is designed to even represent its innovative attempts in the future. Over the year, various brand experiences were improved in the direction of ‘inheriting the spirit of the brand but better containing future vision and management philosophy,’ and a change for the brand mission was required in the process. This change had to be a way to define the mission more easily and concisely while continuing the commitment to create a world connected through joy. 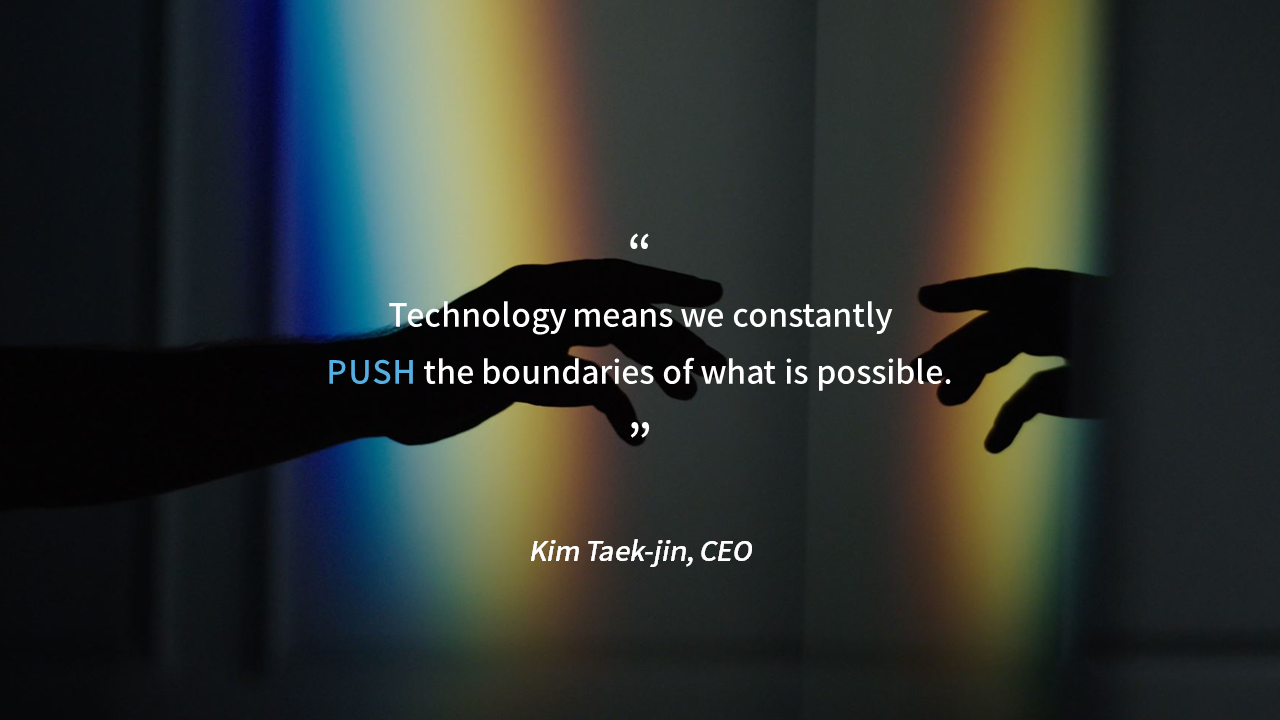 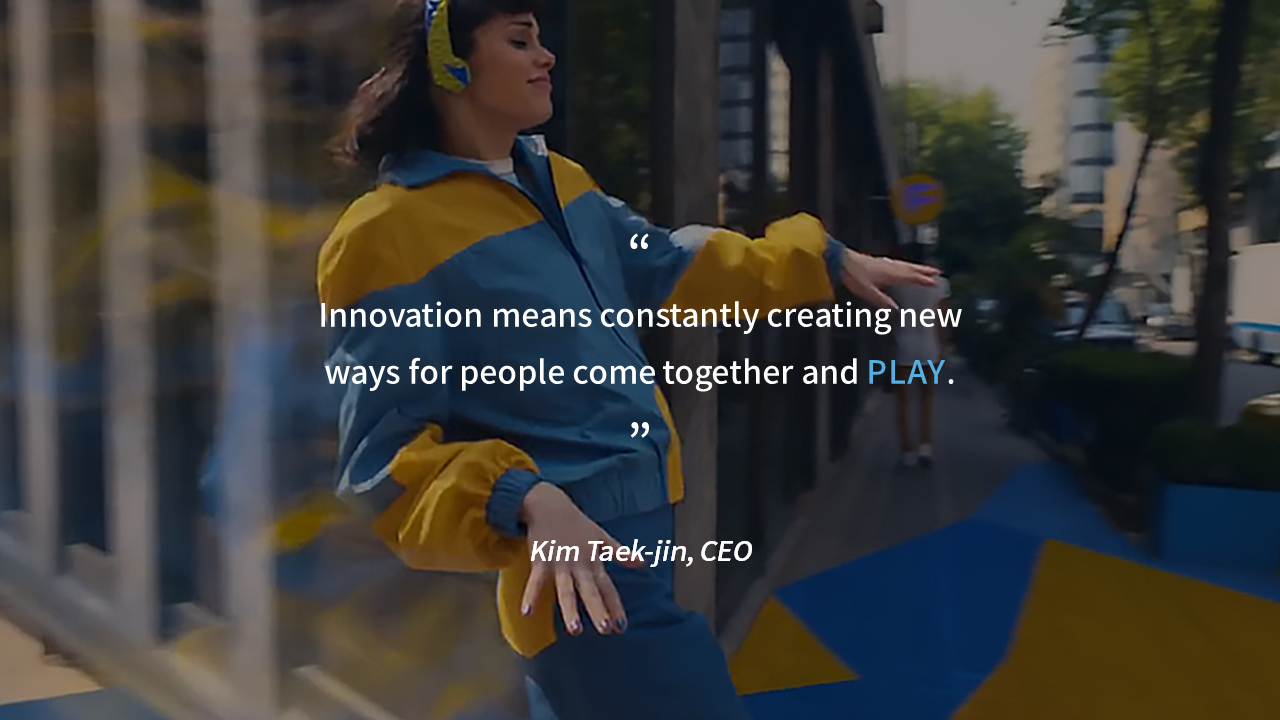 On November 19th, CSO Song-yee Yoon, in charge of NC’s brand strategy, announced NC’s new mission statement "PUSH, PLAY" at the town hall meeting where NC share its core values and major issues. CSO Song-yee Yoon said, “In the process of redesigning CI, we found out that the countless values that constitute NC are ultimately aiming for technology and innovation." PUSH and PLAY are “the process of pursuing joy through technology and imagination while it can be also the joy itself that we provide to our customers,” she added. 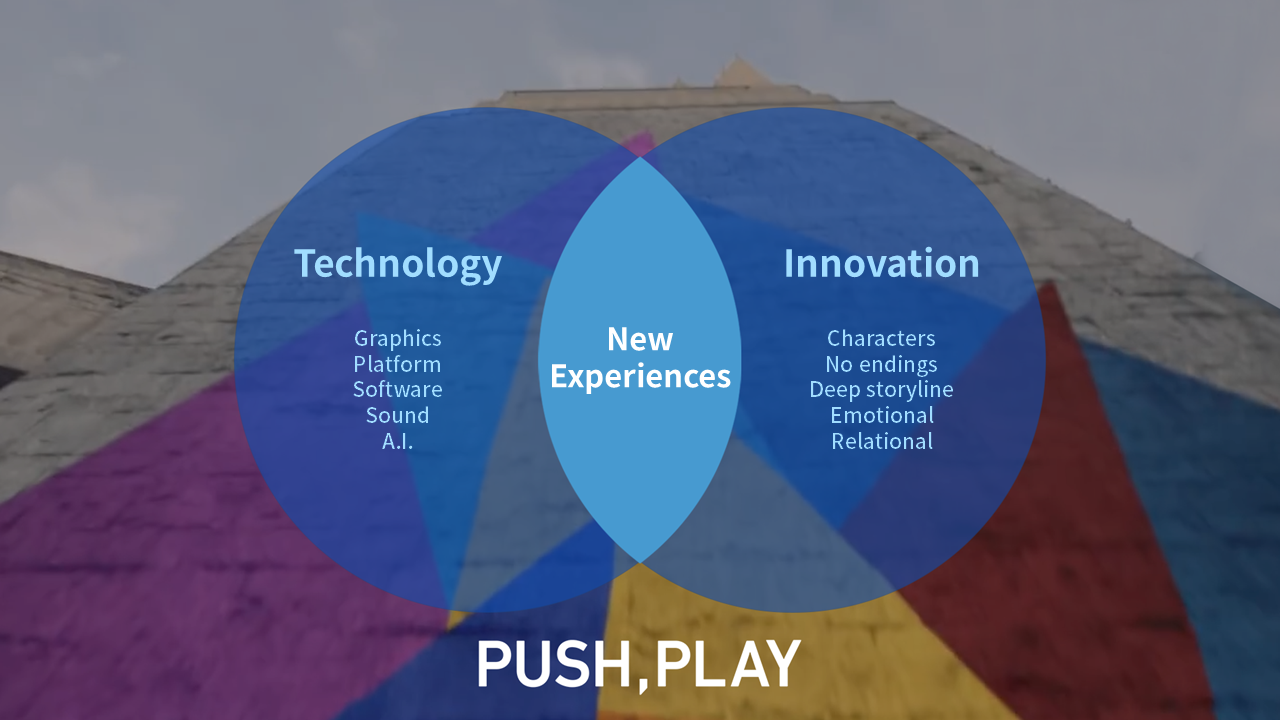 "PUSH, PLAY" is NC’s commitment to continuously challenge the limits of technology, and create innovative experiences where people can enjoy together. The literal translation of the two keywords "push" and "play" in parallel means "to play a game” or “to play a music.” However, as the meaning of the two keywords meets with the values that NC pursues, the scope of its interpretation is extended. 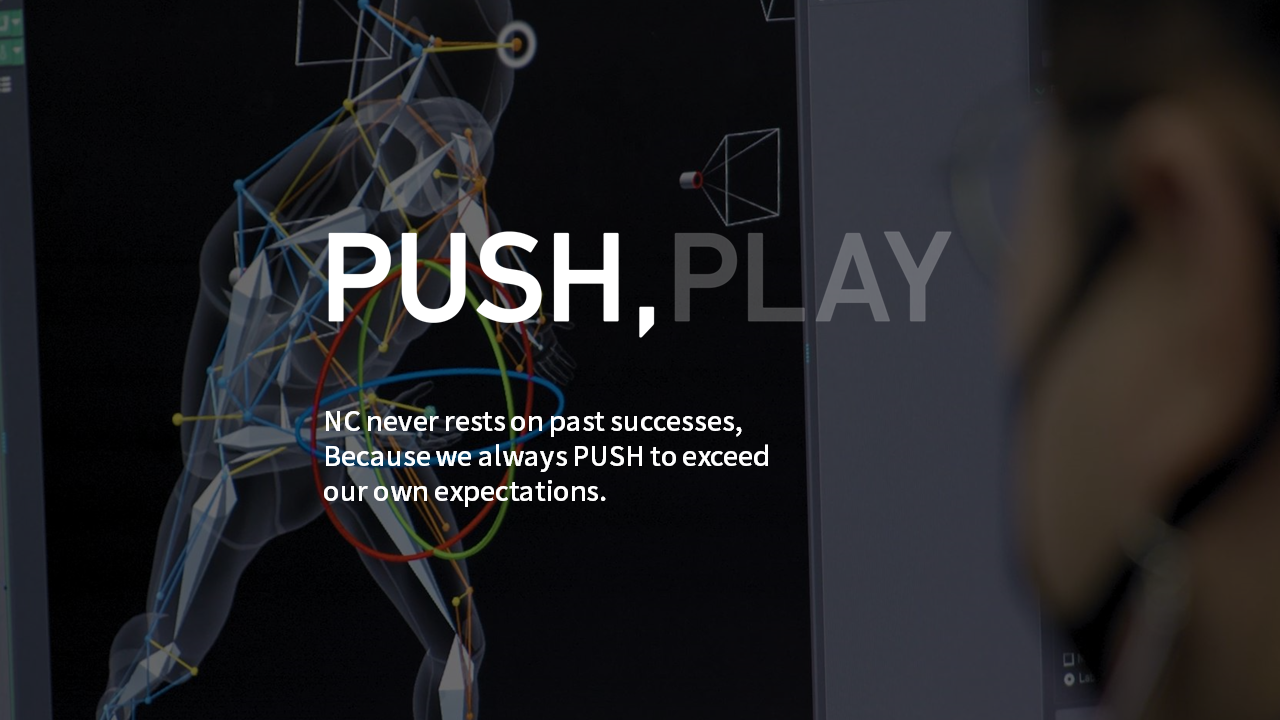 "PUSH" represents the challenging for technological innovation. NC has been leading the game industry with technology representing fields such as art, sound, AI and platform, and has raised the standard for quality in the market with its persistence and pride in technology. In the process of exceeding the limits that considered to be impossible, there were countless challenges in order to achieve innovation with technology.

"PLAY” represents the power of imagination that leads to innovation in user experience. Users can experience new joy in not only NC's IP, such as Lineage, AION and Blade & Soul, but also via the NC Dinos, Spoonz characters, and more—feeling new joy, getting inspired, and enhancing the quantity and quality of this fresh experience every day. This is the reason NC constantly imagines and is the driving force of NC's creativity.

"PUSH, PLAY" is the result of reinterpreting NC’s values and mission in the most NC-like way. "PUSH, PLAY" is a new mission statement that bridges NC’s past and future, which will prove to be a meaningful statement for not only the members of the company, but also the many people who anticipate the future of NC.

Wins 15 Awards - Successful Changes and Achievements Throughout the Year

NC started to reorganize its brand experience by establishing a new team for brand management led by CSO Song-yee Yoon in 2019. After the CI renewal, new changes started to appear in distinct locations where NC and the public meet, such as Changwon NC Park, the lobby at NC’s Pangyo R&D Center, and NC’s official website as well as on social media. It was implemented as a platform that not only provides information about the company, but also effectively displays the unique values that NC holds. Since then, the experience from points of contact between NC and users has been carefully changed including coffee bean packages, stationary (welcome kit, business cards, etc.) for new employees.

The lobby of NC's Pangyo R&D Center and its official website are key points of contact between NC and its customers. In the large media wall located in the middle of the lobby of the Pangyo R&D Center, visitors can enjoy media art that reinterprets video games, view various original video game artwork and the latest cinematic videos as well as experience content to interact with the virtual world inside video games. NC's website is the point of contact that connects NC with the world. As we share our exciting experiences by meeting countless people in video games online, the NC website has applied an interactive story-type introduction page and real-time WebGL technology so that visitors can enjoy an all-new enjoyable web experience.

It was a year in which NC introduced a new branding content. NC developed a new content format that can effectively display selected topics that introduce NC’s values and philosophy in digital and mobile media. For example, <NEVER ENDING CHALLENGE. NC>, a video that played during the KBO League to depict the NC Dinos’ journey to its first championship in team history, is an epitome example of a corporate video that effectively links the challenging of NC Dinos and values that NC strives for.

A corporate video produced with the message of NC and the NC Dinos’ "Never-ending challenge, and the strength and passion of never giving up."

Additionally, NC is constantly expanding its involvement with the public through branded content by publishing articles that show NC’s new perspectives, such as "The Originality," which is an interview series showing the vision and challenging of our staff, "Science to the Future," which spotlights the technology that benefit the world and the scientists who research it, and "Game & Innovation," which looks into technology such as AI in a humanitarian perspective. There is also "Life is a Quest," which incorporates the formats of online drama series and variety programs, as well as the media art project "NC ART PROJECT," and "NC TYPE PLAY," where you can create your own Dingbat art.

NC’s official social media provides content that reflects the values and capabilities of NC according to the characteristics of each channel.

NC’s re-branding activities are harvesting the fruit of its efforts by winning various distinguished awards. NC has achieved external branding accomplishments by winning a total of 15 domestic and international awards for its brand identity design, package design, interior design, and the content of its website and social media channels.

NC is expanding joy beyond Korea into the world. NC West, which is NC’s North American corporation, released a brand-new interactive music game entitled FUSER for North America and Europe in November. NC will soon deploy the global release of Lineage2M, the K-pop entertainment app Universe, and the release of Trickster M and Blade & Soul 2 by the first half of next year.

Following the fast global expansion, NC’s social media is also opening its doors to global users. NC created its Global Facebook social page so that global users can access the latest news of NC faster and has also started to publish articles in multiple languages based on countries where an overseas branch operates 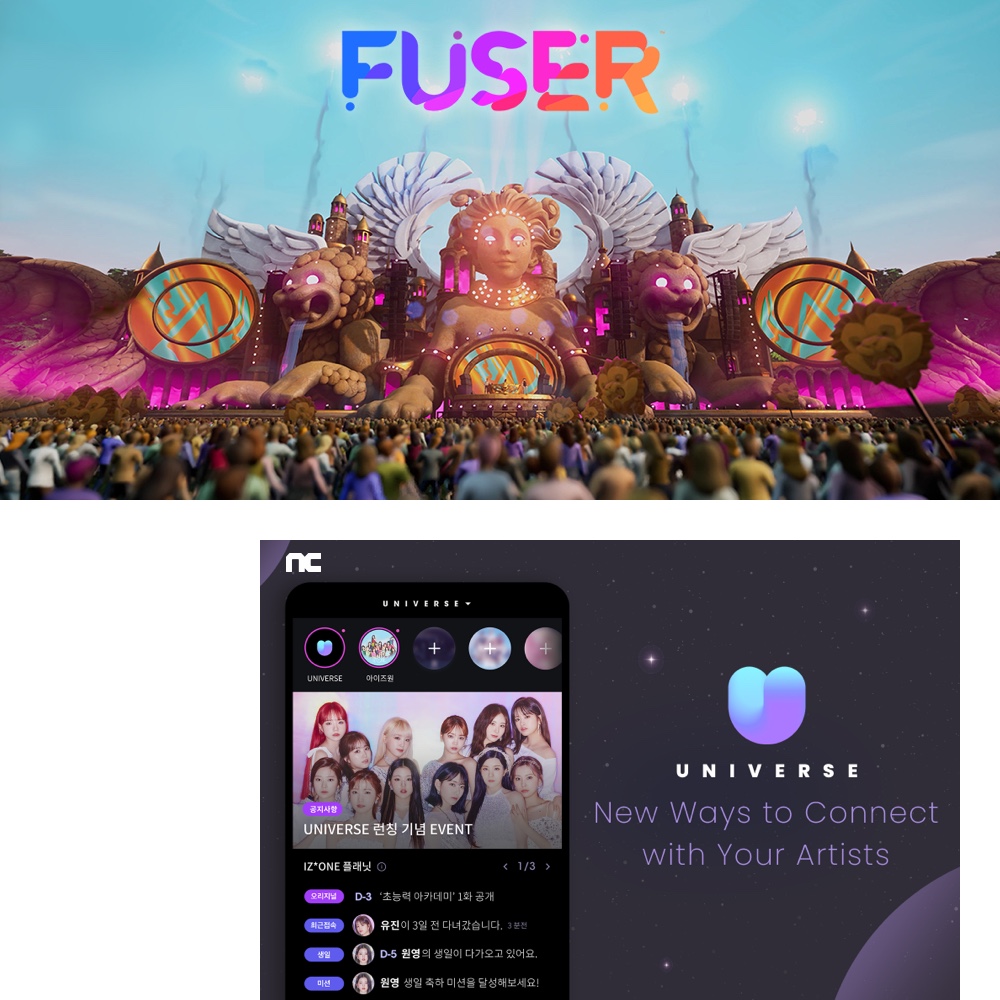 In the future, NC would like to show more contents that can present a meaningful agenda as a leading game developer and IT company in Korea through content branding. The "technological innovation" that NC pursues is not just a tool for industrial development. Until now, NC has constantly brought up the ethical issues that may arise as we approach the era of AI. Like this, we will keep producing contents that recognizing the influences of technology and allow us to look at the development of technology in various perspectives. We are planning to create contents that combine the values that NC pursues with the NC Cultural Foundation, which produces various values for the leap in social quality, and the exceptional performance of the NC Dinos which brings the value of joy to many people. Also, campaigns that interpret the 'joy' in a NC way, such as "NC TYPE PLAY", will be continued.

NC Cultural Foundation and the NC Dinos, conveying the values that NC pursues to our society in various ways

NC’s branding will continue to contemplate on what makes NC and will take the step into integrate the NC’s unique identity and vision for the future in line with our ever-changing society. NC's challenges will not stop until NC’s values and philosophy reach out to people across the world.