NC’s official website has undergone a renewal for the first time in nine years! The overall structure and design of the new website has been revamped with new CI to reveal better brand identity and to better represent the company’s corporate philosophy.

The new website focuses on "connecting" NC with the world. Just as people enjoy the thrilling experience of meeting others when playing video games, NC wanted to deliver just as pleasant of an experience to visitors of the website.

Here are some of the new changes that were made, the intentions behind them, and insights from those who played a role in the renewal process.

NC’s officially renewed website, unveiled in March, is a new channel that represents a feeling of "connection" based on the new brand slogan "Window to the Future."

The website's content and design express NC’s unique brand philosophy, placing an emphasis on finding business information easily and swiftly. Its UI/UX design has been optimized for different interfaces, such as PC and mobile, and supports English, Chinese and Japanese for the convenience of international users.

It was important to NC that they make fresh content and improve UI/UX so that visitors could gain an in-depth brand experience.

Intuitive Web Design and UX For Corporate Philosophy and Vision

This renewal project approached creating a corporate website in completely new and different ways. It features an interactive storytelling intro page instead of an ordinary static page.

NC's corporate philosophy and vision are expressed using visual particles, and its story is divided into three parts: Fusion of Knowledge; Creative Technology; and A World Connected by Joy.

For part one, the landing page shows millions of particles representing the members of NC coming together to form the letters "N" and "C." For part two, the letters then transform into representative symbols of NC games, such as the Flag of Siege War (Lineage), Wings of Aerial Combat (AION), and Bimu AI's Tower of Infinity (Blade & Soul). For part three, the symbols then turn into Aden's Castle (Lineage 2), depicting a brand new world created by players who love NC.

In each part, visitors can use the mouse or their fingers to move, rotate, and tap particles on the screen. Instead of a passive user experience, users can enjoy interesting content through direct interaction.

In other words, employees gather their knowledge to create cutting-edge technology, and NC's unique technology leads to the creation of a world where people are connected. The website design helps people understand NC’s corporate philosophy better through stories and interactive visuals.

The landing page is applied with WebGL visualization technology that renders real-time 3D graphics without any plug-in to offer a new and interactive user experience.

It applies a custom GPU shader that uses the GPU of the user's device instead of the CPU. This shader creates an animation effect of millions of particles that move according to the user’s mouse and a lighting effect that changes the brightness and illuminance based on the direction of light.

Shapes of objects made of the same particles change as the screen transitions to the next. The real-time morphing effect is another special technology that offers a refreshing virtual experience by changing shapes.

The new website has become very special by implementing the latest web technologies, such as multi-device GPU memory management, an algorithm pipeline, and a light particle system. 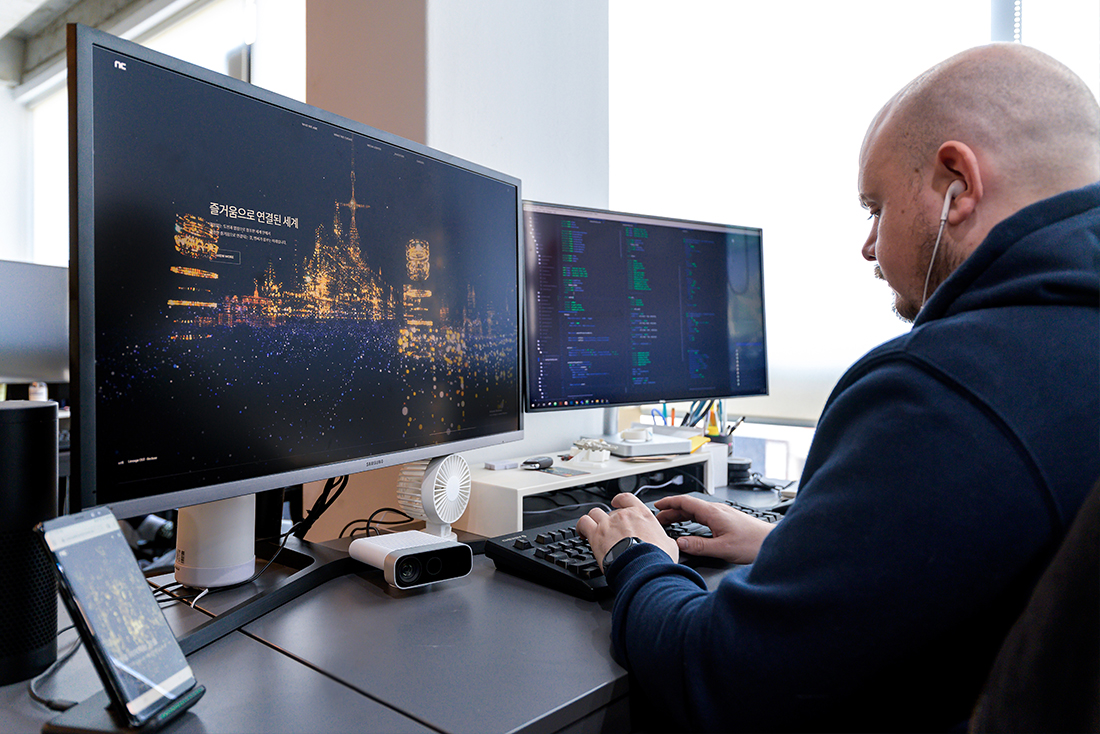 Before starting the renewal project, we had in-depth discussions on the various ways of showing the creative capability and technological power of NC. We concluded that the landing page must be impressive. Therefore, the new CI appears at the center of the screen and a new world made of 100% WebGL is designed to unfold when visitors entering the site. We studied and applied many of the latest web technologies to offer an immersive virtual experience to visitors with scenes created by millions of particles.

The "WHAT WE CREATE" page, which introduces NC's major IPs, required the greatest effort during the renewal process.

It also features high-definition art and video for each game, and a cinemagraph is applied at the top of each page to make the characters and backgrounds appear lifelike. Parallax scrolling offers dynamic web visuals with a multi-layered illusion of depth between objects and backgrounds as users scroll down the page.

Special music was also produced specifically for the new website. Four different existing OST tracks of NC’s main IPs - reinterpreted based on the keywords "Future Nostalgia" to deliver the reminiscences evoked by the gaming adventures and experiences - have recreated into one song. The song was planned by NCSOUND and produced by Jin-hwan Kim (ENIAC), and you can listen  to the song when the landing page loads.

I struggled with how to turn the splendid, beautiful melodies of the original songs into a simple, symbolic piece. Therefore, I sampled the original songs using classical, dreamlike tones to create a majestic feel and incorporated a synthwave style to inspire a futuristic feeling for a more mystical and progressive atmosphere based on the visual elements of the website.

The "NC 21 MOMENTS" page is a unique spectacle that compiles all the significant moments of NC's 23-year history since 1997 with text, photos, and videos related to 21 keywords.

The "BRAND" page features a brand film that introduces the meaning and values of the new CI, and the "ABOUT" page features nine photos of the beautiful NC office building taken by architectural photographer, Yong-gwan Kim.

I started working with NC in 2013 when I took photos of the interior of NC's nursery school, Laughing Peanut. At the time, I indirectly experienced that NC is playing an active role in forming a sound corporate culture including welfare facilities and services for NC employees. And I could feel the new energy of NC again while working on the website renewal project in 2020.