NC ART PROJECT is an experimental art platform that aims to explore the cultural environment in games and discover new creativity that lies in it. We would like to conduct an experiment through this platform by delving into the complex concept of "game," exploring its origin, and expanding it into a new concept.

As the first project, MIXED DIMENSION, converted the worlds of NC’s games into data and transformed them into an art form. Instead of focusing on simple visual effects, it showed that the foundation of all artwork is based on a myriad of data.

In this post, let’s see how game can be art. Looking at the artistic narrative in Minha Yang’s artwork will unveil “what” we wanted to express and “how” we wanted to do it. Please kindly pay attention to NC’s new attempts to achieve poetic expressions of data - Poetic Computation.

In this project, different data was used for each section. All the data was related to NC’s games, including the experience data of gamers, coding data establishing fractal algorithms, motion data obtained from motion captures, and etc. By introducing the process of reverting numerous data and technology to art, we intend to form a deep sympathy for NC’s attempts.

NC THE WORLD made use of user data accumulated in games. There is a large flow in this data that fully embodies user experience. The first five universes that appear at the beginning are the visualization of the character creation data in NC's major IPs (Lineage, Lineage2, AION, Blade & Soul, Lineage M). Because there is a time difference when each IP is created and the amount of accumulated data in it is also different, the volume of the universes and the order in which it appears are expressed differently.

Yang working on NC THE WORLD

This data consists of three types: Source, Target, and Weight. Source and Target replaced users IDs with numbers and alphabets, and the pulling force of these two data was expressed as Weight. In this way, the visual expression was changed depending on how many relationships – namely Weight – one Source has with Targets.

These relationship data constantly changed over time. We randomly set the length of time to make the trajectory of data a little more visible. At first, we calculated it as 5 days per second (30 frames). Then 1 day is 0.2 seconds, which means that the data of the day is displayed for 0.2 seconds. However when this set played, the time of the year passed too quickly. In consideration of the running time of the video, the day was divided into 4 hours and set to expose a total of 6 times a day. In summary, 1 second is 5 days, 0.2 seconds is 1 day, and 4 hours is 0.033 seconds. Finally, the video was created in a structure in which the number expressed in the art changes per 0.033 seconds.

Working on the data.

'Mandelbulb' & 'Menger Sponge' – Algorithms to Explore the Origins of the Worldview

THE ORIGIN, the second section of the work, is a type of generative art.* This work inherits the culture of Demoscene—an indispensable concept in the history of game graphic— and explores the roots of game development.
*Generative art: Art that in whole or in part has been created with the use of an autonomous system.

The work has a flow, starting from a real space and entering a virtual space made of algorithms. The first entry space is a space where Mandelbul constantly changes.

Mandelbulb is a 3-dimensional algorithm of Mandelbrot and a set of sequences that do not diverge. A set of shapes made of Mandelbulb has self-similarity. It has an infinitely divided visual feature and expresses spatial changes that cross macro and micros.

*Mandelbrot: A type of fractal devised by a mathematician named Benoit Mandelbrot. It has self-similarity and has meaning in two areas: inside and outside the set. Fractal art exists that uses the mehtod of coloring these Mandelbrot sets.

The second entry space is a place where an expansive set of cubes made of Menger sponge moves regularly. The Menger sponge is a collection of cubes that divide itself infinitely into 9 units. In other words, it is also called as the Jerusalem Cube and has various names. The Menger sponge is often used to create gigantic real-time urban structures by changing factors or twisting formulas.

We used Houdini as a working tool to visualize the above fractal algorithm. Houdini is a 3D program developed by SideFX. If is no exaggeration to say that almost all of the special effects such as explosions, flames, smoke, sand, and fluids in the currently Hollywood movies are made with this tool.

In the case of building modeling, the entire structure is created at once by designing a basic structure using an algorithm instead of modeling each part separately. In fact, the game also uses this tool to create special effects or terrain. 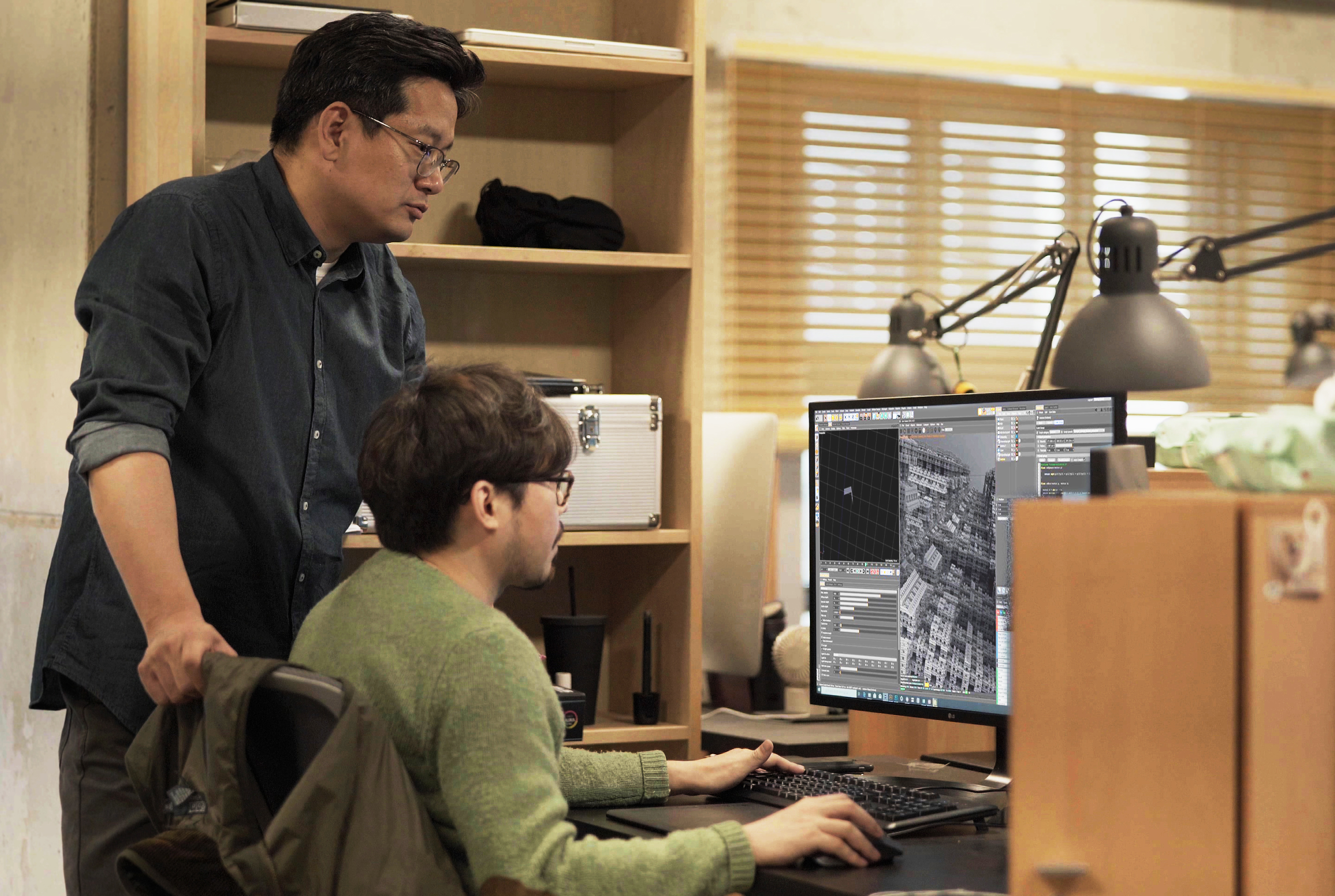 In the fourth section, COEXISTENCE, a third entity that representing the characters and users in the game appears. The shape of the entity was created after the motif of the character’s unique properties. In this section, for example, there is a scene in which two physical properties of a liquid in colorful colors complete a picture with each other.  This splendid entity is inspired by the skill attributes and visuals of Painter, a character from AION. In addition, in order to express the archer, which is the inherent property of ‘Thor’ in Lineage2M, it was woven with a bowstring to create a tense movement. 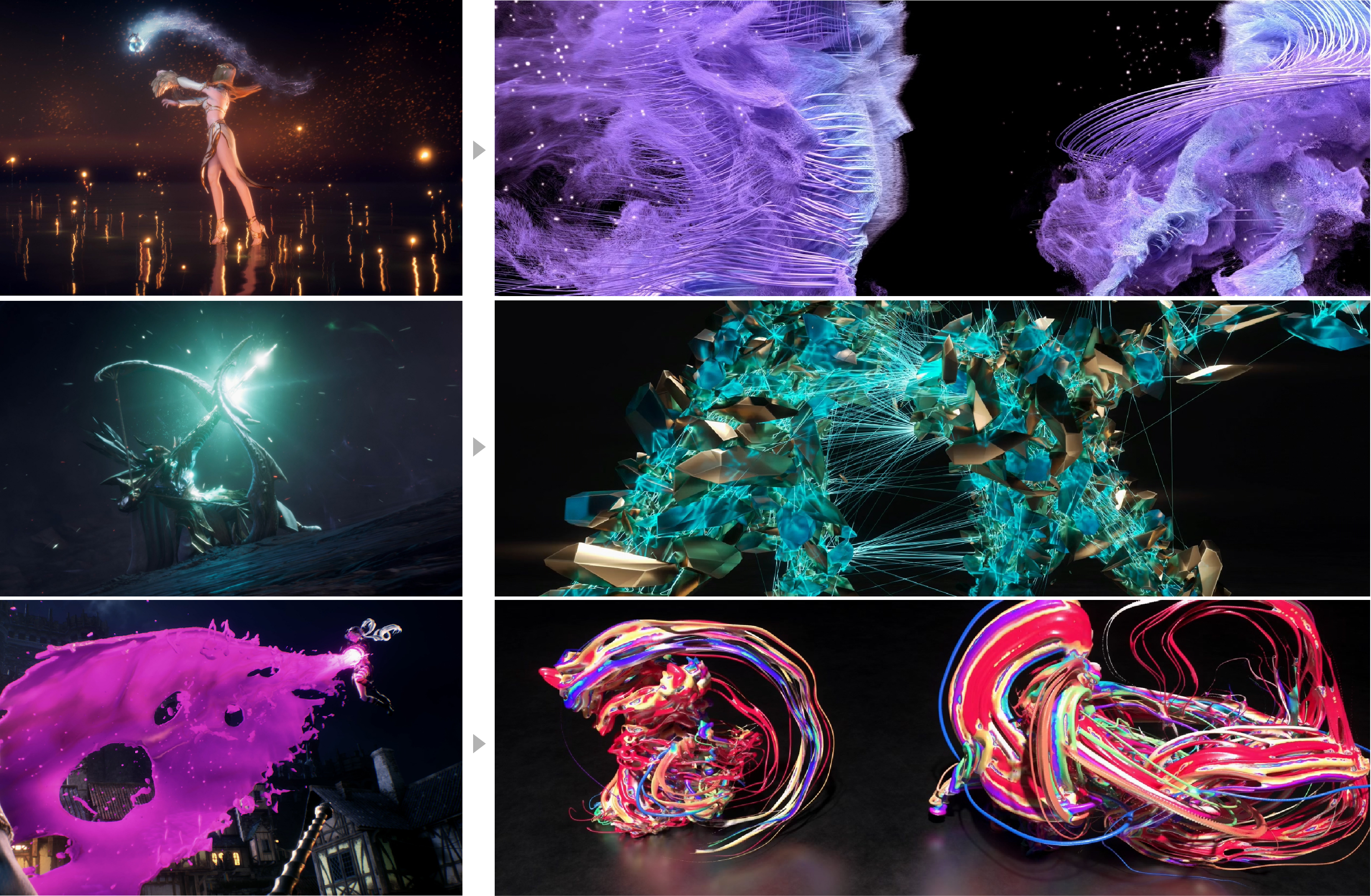 Motifs and images for each character: Einar, Thor, Painter

This lively movement is made with motion capture technology. The characteristic movements of the three characters were expressed in the creative dance of modern dancers, and this dance was transformed to motion data. The accuracy of movement was improved as composing of big and clear movements; however detailed movement were easy to miss, so on-site corrections were frequently made. 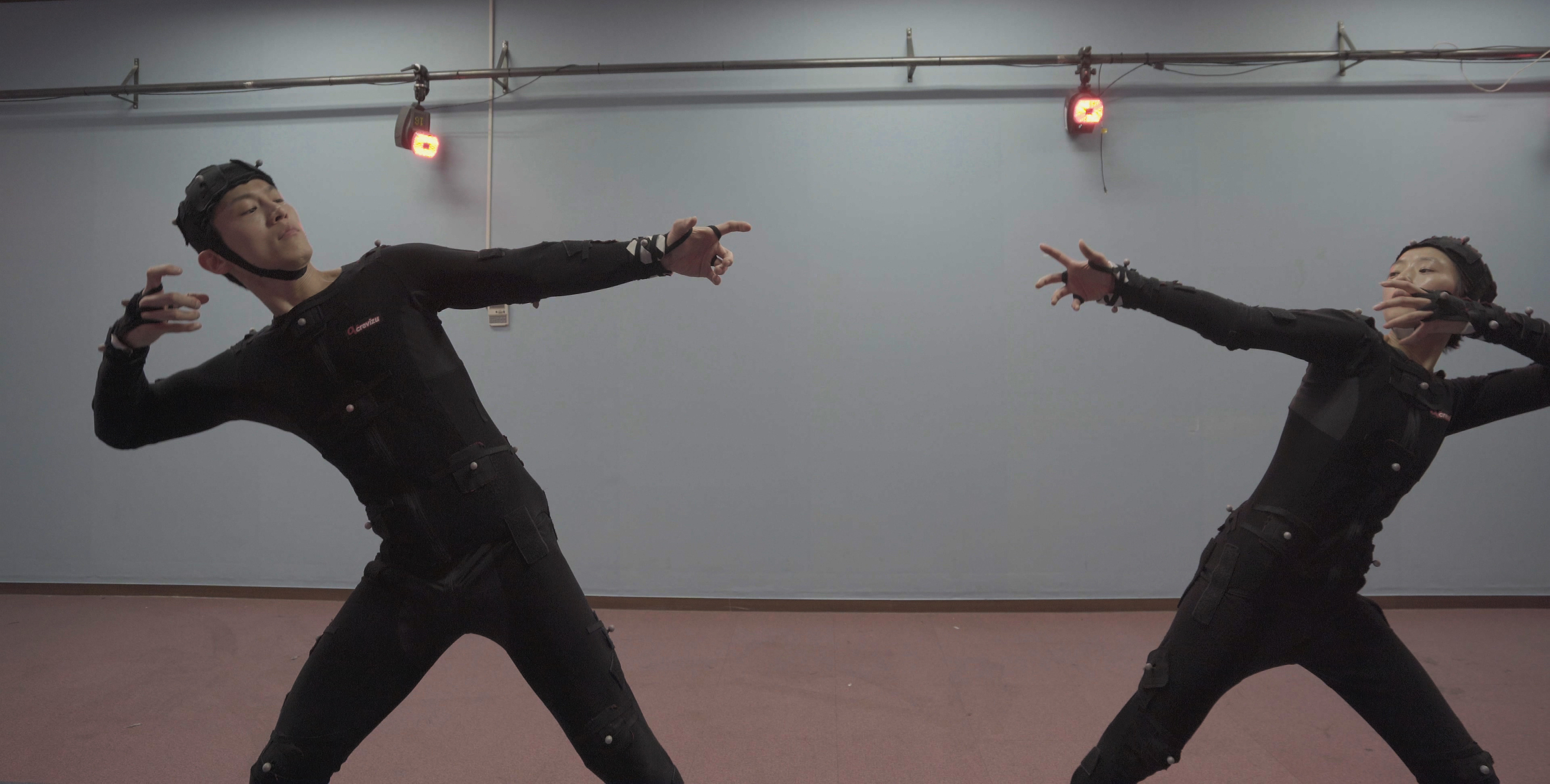 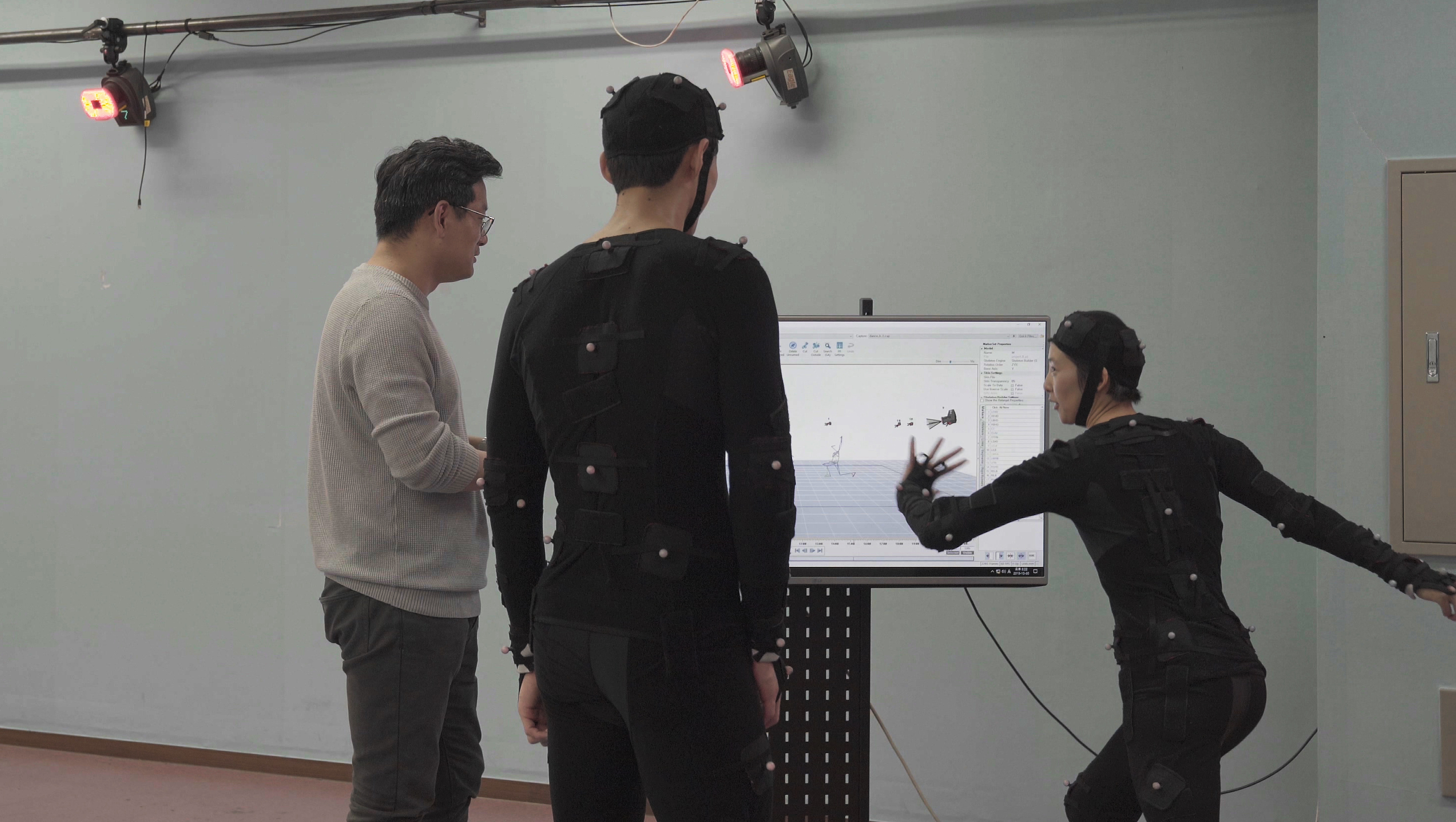 The motion data was transferred to the 3D tool and reborn as a new entity. The data was processed twice in a total. The character reflected the motion data was elaborately refined by 3D modeling, and then the designed graphic was overlaid and converted into a new entity. In fact, this process is similar to the process of reflecting a character's live movement in a game. 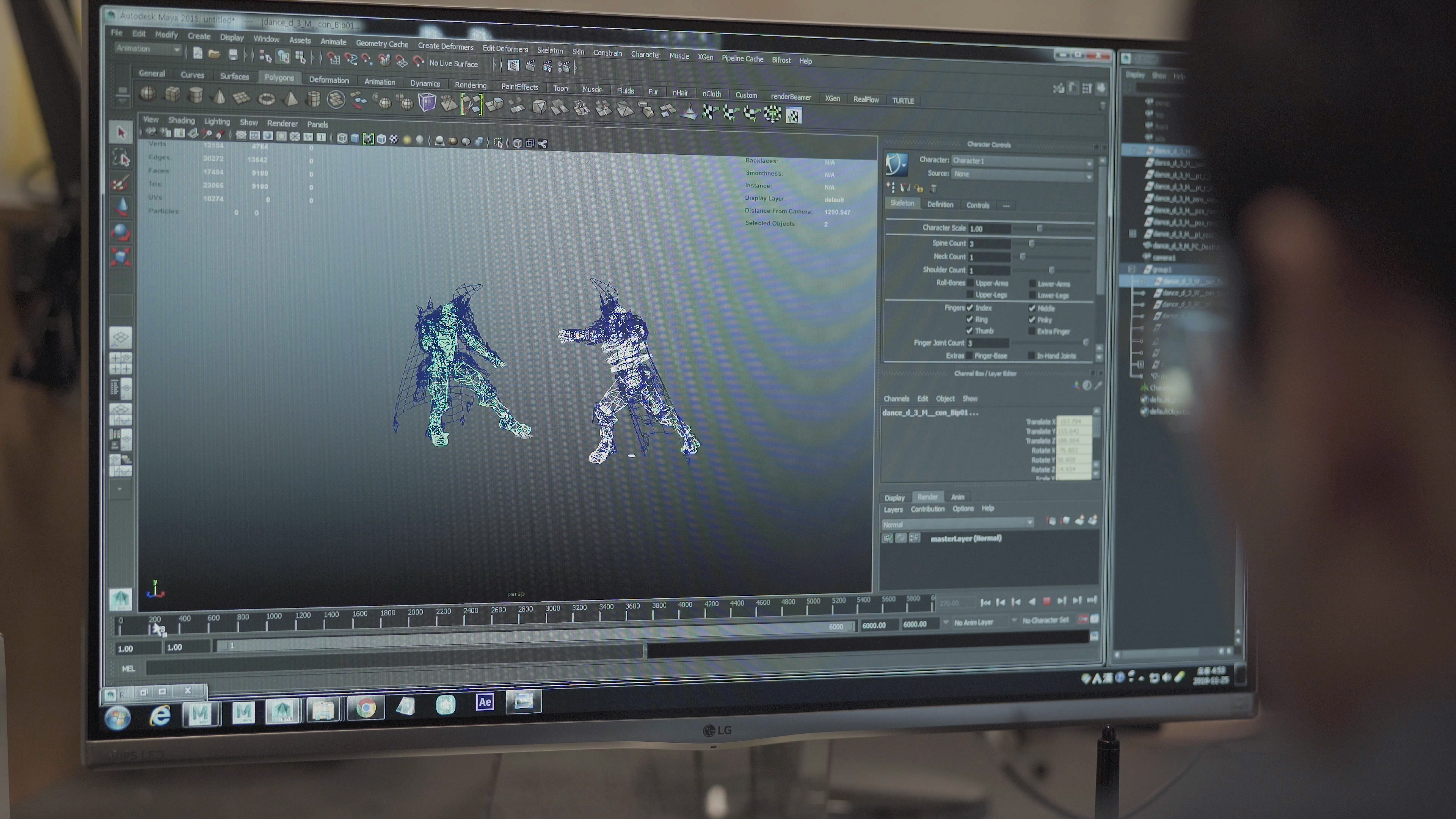 In this post, we introduced the data and processes used in MIXED DIMENSION. We hope that our explanation was enough for you to see how the poetic computation, introduced at the beginning of this post, was implemented. NC will continue to attempt to reinterpret the worldview in the game and replace it with art. This  attempt will create a virtuous circle of creation that inspires new creation and establish itself as a genre called “Game Art.”