The NC ART PROJECT is an experimental art platform that aims to explore the cultural environments in games and discover the creativity that lies within them.

It originated from a perspective of looking at games as a cultural environment that connects the virtual and real worlds. In an attempt to reinterpret the origin of the massive environment called games and substantialize its philosophy into an artistic form, NC ART PROJECT serves as an experiment to seek new possibilities of an art genre, namely “game art.” Furthermore, it aims to create a cycle of creation wherein the recreation of game worlds and characters can inspire new game development.

The first NC Art Project is entitled MIXED DIMENSION, by Minha Yang. Yang introduces media art to interact with the worlds inside of NC games. Please pay attention to this experiment to see how the morphological reinterpretation of the culture surrounding the game establish a new form of interaction.

Every game has a worldview. As ironic as it may sound, there are fictional worlds that actually exist at the same time. Players identify themselves with characters and freely roam around the virtual worlds of games. What, then, are the attributes of games that create the interface between fictional worlds and players?

This project starts with a curiosity about a complex concept and the origin of games. We viewed games as a gigantic cultural environment for connecting the virtual and real worlds. And this work is an attempt to think about the background deeply and depict the transition process of virtual and real.

MIXED DIMENSION is comprised of five sections: NC THE WORLD; THE ORIGIN; EVOLUTION; COEXISTENCE; and COGNITIVE SPACE. It sheds light on the cultural environment of the virtual and real using game data and worlds as well as player interaction, and embodies them into various forms of media art. It will provide an opportunity to not only enjoy visual effects and interactions but also to think about the messages contained within.

The first section of MIXED DIMENSION, NC THE WORLD, is a visual data graphic that establishes NC’s identity based on the user data accumulated in games.

User experience from character creation to growth, parties, clans and battles happening in games are accumulated as data. Various networks and accumulated data symbolize the living history of NC and awaken its identity.

5 universes created by the accumulated data

NC THE WORLD visualizes about 180 million pieces of data and focuses on aesthetic expression. The accumulated data from the past creates large waves and clusters, which fill the screen and form a universe that represents the size of NC.

There is a complex world established based on the relational data between players, and interactions continuously occur. The existing and newly generated interactions are concentrated together to create  a massive universe and a series of processes expresses the overall process of restoring the identity of NC.

A complex universe based on the relational data between players.

THE ORIGIN – An Attempt to Explore the Origin of the Worldview

The second section, THE ORIGIN, takes on the concept of the demoscene, a major cultural phenomenon of producing 3D audio-visual presentations using game graphics. Demoscene is an important subculture in game development that changes computer games into mathematical visual play.

Demoscene groups that are widespreadd around the world continue to attempt methematical and visual expressions in various ways. These attempts significantly affected the development of graphics engines' real-time expressions and 3D animations' speical effects.

THE ORIGIN tried to show the essence of game development and gaming culture as well as mathematical investigation lying at its origin by abstracting fractal algorithm and real-time rendering algorithms that are frequently used in demoscenes.

Early stage of construction of the worldview

The third section, EVOLUTION incorporates the concept of co-evolution as its motif. Co-evolution is a theoretical concept in the philosophy of science wherein human beings and tools (machines) co-evolve by influencing one another. Games share the same context in the sense that they clearly show how human-made tools change the cultural behaviors of humans and how humans achieve progress in tools again.

EVOLUTION is an attempt and expression meant to symbolize organic hyper-jump between games, between players, and between games and players. The space inside the work quickly metamorphoses, contorts, and decomposes into points and planes to reconstruct the original resolution. This process represents the evolution of virtual reality in games. 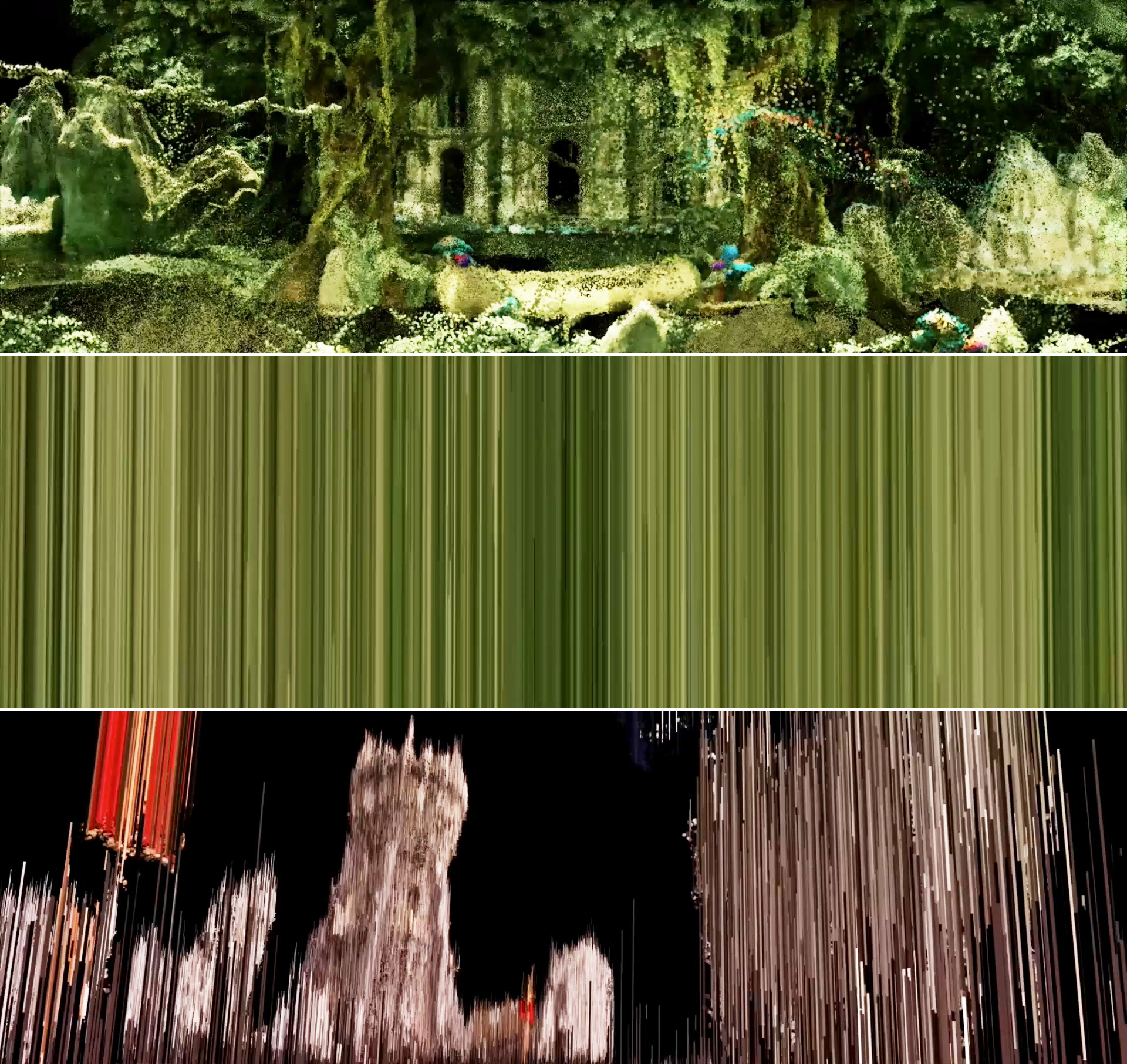 COEXISTENCE – Interactions Between Players and Characters

The fourth section, COEXISTENCE talks about a "relationship" that exists and have influences. It allows us to see how virtual characters and players intertwine—in a three-dimensional, multilateral manner—from multiple directions.

On the screen, entities are created based on NC's game characters. They move uniquely according to the attributes of characters and create new waves by encountering other entities from another dimension. These organically intertwined entities show the connection between the virtual and real worlds.

Looking at the history of media art, we can find many pieces of artwork inspired by the connection between the narrator and receiver where they are clearly separated. In this work, the relationship between the narrator and receiver is interpreted as the relationship between the player and character. The phenomenon of being intertwined with each other and being connected as one is expressed in three-dimensions.

Games are a medium wherein interactions and reactions occur most actively. The fifth and last section, COGNITIVE SPACE is a place of communication to experience direct interaction with the virtual world in games. It is installed in the lobby of NC’s Pangyo R&D Center.

It is operated in two modes: standby and interaction mode. In standby mode, images that restructured the virtual world of NC with multitudes of lines are displayed. It was expressed in a poetic and lyrical way rather than superficial so that  audience can infer the story beyond the image.

This work attempted to express the process wherein the boundary of real and virtual collapses and combine while bringing the existing properties like line and ink into the virtual world to create gentle, poetic images.

Media artist Minha Yang takes visible reality into virtuality and reinterprets it in his own way. In MIXED DIMENSION, he expresses a lyrical narrative about the creation and coexistence of the multidimensional world that NC wants to deliver.