I appreciate the opportunity to talk about one of my favorite topics, Games and Innovation. But before I get to that, I would like to talk about the importance of play.

Anthropologists and developmental theorists do not doubt the significant role of play in human evolution. Higher animals and humans come into the world with incompletely formed neuromuscular systems and behavioral repertoires. To become competent adults, they must exercise and learn and practice behaviors essential to their survival later in life, which is where play comes in. Without play, the adult animals (and adults) would be poorly equipped for the tasks of life.

Young animals play more than older ones as they have more to learn. Predatory animals play at chasing and stalking on prey-like objects whereas scavenging animals play at fleeing and dodging. There is rich literature of studies about bonobos playing to develop social skills. Our children play with a similar category of skills as bonobos, along with some uniquely human skills. These include language play, constructive play, and playful use of mental abilities such as memory, imagination, attention and reasoning.

Play is crucial for survival. The very reason for us to have periods of youth is in order to play, which supplements insufficient hereditary endowment with individual experience, preparing our young for the coming tasks of life. Play also is a means of reducing hostility and promoting cooperation.

Anthropologists report regularly that hunter-gatherer societies are the most egalitarian, non-hierarchical and highly cooperative societies that have been found anywhere. The hunter-gatherer way of life requires an intense degree of cooperation and sharing, which is incompatible with struggles for dominance. To reach this level of cooperation, hunter-gathers have to develop cultural practices that suppress the drive to dominance, which is accomplished through play.

Games have been an important part of play for humans for more than 5000 years. Senet is one of the oldest known board games.

Fragmentary boards have been found in First Dynasty burials in Egypt, dating back to 3100 BC. Paintings of this ancient game can be found in multiple tombs, including the Third Dynasty tomb of Hesy (2686-2613 BC) and ones from the Fifth and Sixth Dynasties (2500 BC).

With such an important role to our species, play is an engine of innovation. As art, philosophy and literature push the forefront for development of human intelligence, capabilities and imagination, play is crucial for a quantum jump of enlightenment and social breakthroughs. 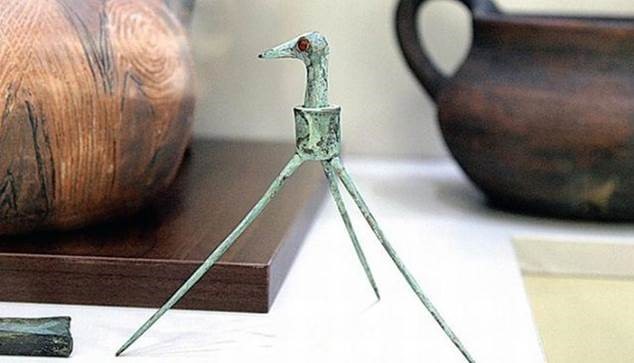 In terms of innovation, novel objects and technology have always been a cornerstone of play. The image shown in the picture is a Stork from Bronze age, which allegedly dates back to around 1500~1200 BC. It was found in an area where Indo-European tribes inhabited and found along with other archaeological artifacts. Bronze was the most scarce and advanced material of the time, and toys are often found in the form of weapon like objects such as slingshots and bows.

Just the term “video games” tends to elicit a strong response from audiences. Without trying to stereotype, those of the older generations tend to think of video games as children's toys, (despite having several game apps on their smartphone), whereas the younger generations see video games as a central part of their day-to-day lives.

The US alone has more than 166 million adult gamers, with a near-even split between men and women (Entertainment Software Association, 2019). And while video games have only been around some 40-ish years, video games are an evolution of play and playing – a trait as old as life on this planet.

At NCSOFT, we started our company in 1997. I am sure many of you in the audience remember what a barren place the internet was back then. According to the US Census Bureau, less than 20% of households had internet access in 1997 (US Census Bureau, 2001 ). Very few people had e-mail addresses and the dominant internet browser at that time was not even Netscape. We were using Mosaic.

But despite being in the figurative stone age of the internet, NCSOFT and a few other companies already saw what could be done with sparsely existing bits and pieces of nascent technology, so we designed a virtual playground where people interact in a world using 3D graphics interface over an internet connection. Graphics played another important role in the evolution of play for video games.

That game and a few others like it at the time became one of the first virtual worlds – worlds that proved that there was a market for a social network, well before social networks became mainstream services. And as that 20-year-old game has grown well beyond the typical 3-5 years an online game is expected to last, we’ve seen a lot of groundbreaking technologies adopted in a more widespread manner. It is only fitting to go back and consider the role of game and play as a crucial means of achieving learning and innovation.

Video game play also is a driving component of technology development. It is a widely known industry norm that people upgrade their computers when a new computer game comes out in countries where PC games are dominant in the market. As video games push the boundaries of play with better graphics, bigger worlds, and more engagement, so too must technology keep up with demand. Chipmakers develop and push the edge of computing with multi-core CPUs, which are then tested by gamers, who put them through the paces as they notice the speed and latency crucial to playing competition within games.

Video games were where virtual economy and free to play business models were introduced. It was one of the first market places where online payment systems were adopted and tested across the board. Video games are giving inspirations to design of digital currency and bit coins.

The jump from 2D to 3D graphics for video games in the late 90s ushered in a technology rush to create powerful and standalone graphics processing units. As those GPUs became more powerful and more affordable to keep up with consumer demand, it wasn’t long until AI researchers tapped into GPU power to advance AI research in the late 2000s. Between the increased CPU and GPU computing power of available machines, the increase in both bandwidth and at-home access for broadband internet, video games provided us with a technological forecast for an environment that allowed AI to flourish.

While AI technology is finally taking hold on a commercial level with the advent of tech giants and “personal assistants,” those who played video games have been interacting with AI long before Siri came about.

At NCSOFT, we recognized that video games are a great platform for AI technology development. Any in-game character, monster or creature that are not controlled by another player is powered by an AI that makes decisions based on its sensory inputs. It adopts its strength or combat strategy based on the opponent users’ play patterns and skill mastery of in-game controls. We were blessed to have all the research, data and a platform to test these algorithms right in our own virtual, digitalized world.

Looking to the future and all the anticipated technology development and innovation ahead of us, we see that advancement of display and data visualization will bring us an opportunity to advance our play experiences and related technology. VR and AR have been buzzwords for quite a while already, and we have witnessed a number of new innovations from those developers and hardware makers who are trying to create a truly immersive platform. From some of the early games made with VR in mind, we see that the intensity of emotion and experience is something that was never imaginable without new display technology. We’ve already talking to researchers today to use nanotech to create a true holographic display. And while we’re still in the early days of this technology, the future that it opens for entertainment and video game options are limitless.

More sociologically-informed research has sought to move away from simplistic ideas of gaming as either 'negative' or 'positive', but rather seeking to understand its role and location in the complexities of everyday life. Famously, an MMO inadvertently turned into a predictive model for the Center for Disease Control when players used an in-game exploit to spread a deadly infection in the game’s heavily populated areas. (Eric Lofgren, 2007).

20 years ago, I had to buy time slots on a communal supercomputer to run my neural network algorithms. Since then, computational techniques have advanced tremendously, but most people in the field agree that the availability of data, storage and processing power made the proliferation and ubiquity of artificial intelligence today possible. The ideas and intent were there, but being able to sense and iterate made the recent burst of technology possible.

Given all of the advancements in technology, it’s not hard to imagine a world within a decade where nanotechnology is so precise and can move so much data over networks that we’ll be able to create sensors that absorb and transmit real-time haptic feedback with little latency. We’ve already seen several prototypes in the games industry that allow players to feel more immersed in games with vests that simulate taking in-game damages. And while those solutions are fairly rudimentary, a research team earlier this year published their findings for creating a flexible and wearable piezoelectret sensor that would connect humans to machines via AR/VR interfaces. (Zhong, 2019)

Nano technology is poised to offer these opportunities for us through establishment and capacity that is available today. Nanoparticles are already being used outside of laboratory environments to create holographic displays. Today, we can only imagine what the impact that could be to the world of entertainment and immersive story telling when such immersion is available without peripheral devices such as goggles or helmets, or being forced to sit stationary in front of a screen.

Responsive environments that talk to us, multidimensional sensory data that can travel and be delivered to the end users through communications networks, and displays that can process and construct an order of magnitude of more dense data than any commercially available display out there are all the possibilities that we are very excited to see and will have a tremendous first-hand impact on designing entertainment. I look forward to the future to help provide the public with opportunities to experience all these wonderful new technologies and create entirely new constructs in which we all will play and grow together.

With a number of partners in academia, we are creating a playground for researchers to unlock the next technology breakthrough for play. Whether it’s creating the next generation of VR headset using QLEDs, nano sensors that allow for full-body control and interaction within a virtual world, or thoughts far beyond these, we want us to focus on what I’ve been talking about – play. Understanding play and innovation through it is crucial for what could be the next big social breakthrough for our species.